Should I wait for pooling

34-6N-2W MCCLAIN Have been offered $125/nmi and 3/16ths but have been also told that this will be pooled soon. Offer is comparatively low (they started lower) and don’t know whether to take this now or wait for pooling. Appreciate any advice. 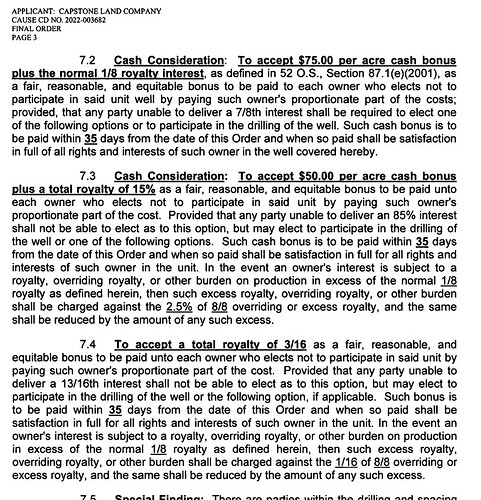 4 sections have finally poolings near your section. All 4 are no cash with a 3/16th. 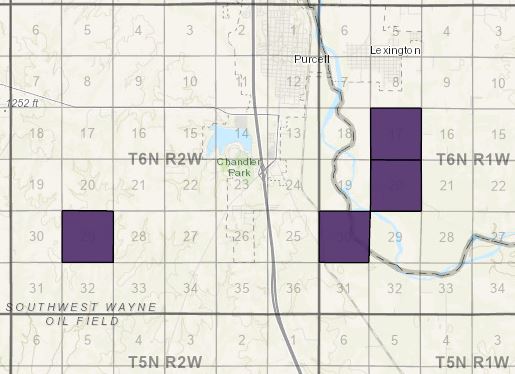 This is very helpful. Thank you.

Thanks for your reply and for sending the above. From the looks of this pooling order, I should be happy with the possibility of $125/nmi and 3/16ths. Didn’t understand why you suggested that I might want to wait for pooling if I would expect the same outcome.

Didn’t understand why you suggested that I might want to wait for pooling if I would expect the same outcome.

Is the offer from the company (or their broker) that is actually drilling your section?

The operator will have to testify to the best terms paid… fair market value. If leases are taken in the nine sections surrounding your property for better terms… they are required to tesity to those term.

They can testify only as to what they “know”. Ignorance is bliss in many cases.

never have I ever seen a pooling go for the highest price paid in the section and certainly not the 9 spot. Lots of ways around that.

The outcome is not only the bonus, but the actual terms under which you will get paid. If the lease has terrible clauses which included post production charges, then that is not a good option and pooling may be better since “usually” the pooling is for gross revenue, not the net. Pooling is also for the just the intended reservoir and the horizons immediately above and below in some cases. Leasing is from the grassroots to the center of the earth. Leasing-one bonus for each lease. Pooling-sometimes I have been able to pool different horizons over time and received multiple bonuses if they did not drill in time or wanted to drill a different horizon later.

If you have pertinent knowledge… show up at the hearing and protest!! Believe me… knowledge is power for the little guy!!!

Make sure this is an offer to lease and not to buy your minerals. You never did specify this.

I have requested a leasing offer document which is to strike any post production costs and any extension language. They have requested leasing the “deep rights” . I was turned down for 1/5, $0 bonus so the best they will offer is 3/16, $0.

If I execute the lease terms but stay silent on the royalty and bonus, and it goes to hearing in late Feb as planned, then I will probably get the 3/16 (and maybe some bonus).

The upside to being pooled is then not handing over the rights to any future interest in any deeper horizons.

Am I understanding the game correctly here?

Just to clarify, they won’t offer you a depth clause?

Also, what do you mean “stay silent on the royalty and bonus”?

You may only lease or get force pooled. You cannot have both. A lease will directly say what royalty but not mention the bonus. If they want “deep rights”, they need to clearly document what those are in the lease. Tie them to stratigraphy in a known well or something with hard data.

If you do not lease, then you may be force pooled. You have 20 days in which to make a selection or you will be assigned the lowest royalty. The pooling will clearly state what reservoirs are being pooled and what the bonus/royalty options are. It will have a time line in which to spud.

What section do you own in the township? In order to Force Pool, the reservoir must be spaced. The only new spacing I see in the Township is for the Woodford common Source of Supply. Which would be deep.

We also have another 20 acres in section 11 that is held by a shallow producing horizon that apparently cannot be leased. Will that parcel be force pooled into the Woodford common source to our benefit or to the benefit of the operator of the shallow zone (Ranken Energy)? That well has not paid any royalty in this calendar year.

Hard to answer exactly without specifics. Ex: If you had a separate lease for a different 20 acres in 11-5N-2W and it did not have a depth clause, then that lease holds from the base of the grassroots to the center of the earth as long as the terms of the lease remain in force. So a shallow horizon that is producing can hold to the center of the earth as long as it is producing. The Woodford may be included in the spacing of the new well, but your lease terms from the old lease will hold you at the Woodford. Your lease should say what the delay can be without losing the lease. Some say 90 days with no royalties or operations, some say 180 days. Some require that you request a release of lease, others do not.

If operator has equipment on the current well, even though it is not active… they may argue that it validates the lease. I would challenge them with a letter to produce or release the lease! Just saying.