Looks like things are heating up for Verdun in the Fayette/Austin County area. They’ve just completed three wells on Wunderlich Road in Fayette County. Now they’ve just about completed a new pad site almost in Shelby on FM389 (its actually just inside Austin County). I haven’t seen any permits yet, but the pad site is in the north corner of the existing Passchendaele unit. It’s almost exactly halfway between their two existing pads in the area.

Verdun formed two more big units last year on the other side of Shelby that they called the Tannenberg and the Gallipoli that were permitted in Austin Co. The plats they filed show the initial wells in those two units being drilled from the same drill site south of 389 where Cutoff and Skull Creek Road intersect they had used to drill the Saint Mihiel and Belleau Wood wells at the end of 2019. Those SM and BW units join the south side of the new Tannenberg and Gallipoli units and the drill site sits in the middle.

If you are seeing another pad going in near the north corner of the Passchendaele unit and near the meeting hall, it must be for more wells they plan on drilling in the three units that join in that area.

Below is a cut and paste of the five unit plats Verdun filed that I put together to see how the boundaries match up. I marked where the other two drill sites are located.

Would the new pad you are talking about be close to that rectangular area that appears got left out of the Cantigny and Tannenberg units?

So far each of the laterals Verdun has permit were located right at the edge of each unit, apparently leaving room where four, five or more wells could be added in each of them, which would probably require another drill site somewhere in the middle. If those most recent wells they drilled can do 5-6 BCF in a little over two years like the Saint Mihiel and Belleau Wood that seems pretty logical. 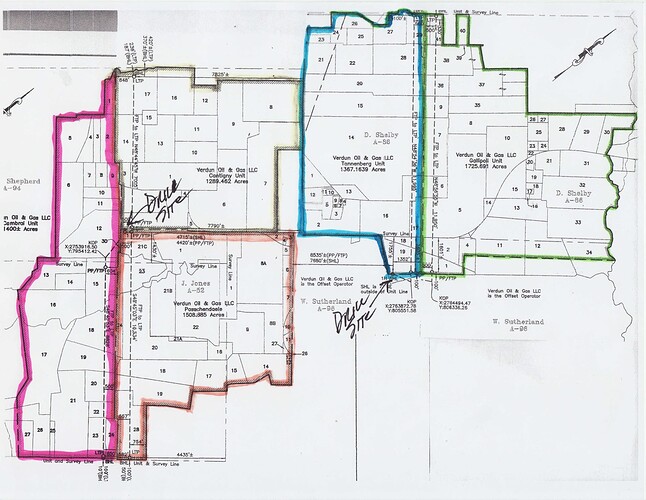 Dusty, the new pad site is at the north corner of Passchendaele Parcel 8A, immediately adjacent to Parcel 5, so yes it’s right smack dab in the middle of the two existing pads. The curved property line in that area is the alignment for FM389. The St. Mihiel unit is adjoining the Passchendaele Unit, so they can reach four units from the new pad from what I can see.

Interestingly, on the west drill site in Fayette County, only two of the three wells were connected and have been producing for about a month. The third well had a smaller rig on it a couple of weeks ago but the wellhead is not connected to anything. If they drilled according to the permit plats the non-producing wellhead is the Cambrai Unit, but I don’t know that for sure. Just some amateur sleuthing on my part.

This sounds good; but, I suspect these guys are chasing gas now that it has become profitable. Nice to hear, but, they are about 40 miles NE of my area. Send them to SW Fayette so we can get interested. Thanks for the update. Interest has definitely been lean for awhile.

Morning, Bigfoot. Lean? You can say that again.

But, please don’t. (lol) Actually, I have small royalties

coming from some wells in Fort Bend county that

go into Austin county. I guess I should keep aware.

Have they drilled the two wells Verdun permitted on what I’m calling the east side of Shelby?

The status on those permits shows they were spudded last November but I figured that was a portable rig they used to spud and set surface casing before they moved the deep rig over.

Yes those wells on the east side have been drilled and fracked. Looks like they’re setting up production piping now.

Hello Kraut: Nice to hear that you are still kicking. Still hot and dry here and no sign of activity moving our way toward the SW yet. Still early and high hopes!

Thanks for the report. Hadn’t been by there in a while.

About the same here, weather wise. My son has been working ‘flow back’ fairly steady for the last year. Mostly, south of San Antonio and one, presently, in east Louisiana. Another waiting for him near Freer, Tx. I wish they would move up here. Take care, Sir.