I recently received an offer to purchase my mineral rights in Dawson county. I haven’t lived there in over a decade and was just wondering if there was a way to find out what other people have sold for in the area to make sure my offer is fair. The company making the offer is Rio Petro Resources out of Midland. Any information would be greatly appreciated!

Depends on the location. Where are they located in Dawson?

Great news. Your right in the heart of the action. Let me see if I can attach a snip. What did they offer you? (Also, sorry for the crude drawings I figured I would put where you own on the RRC GIS) 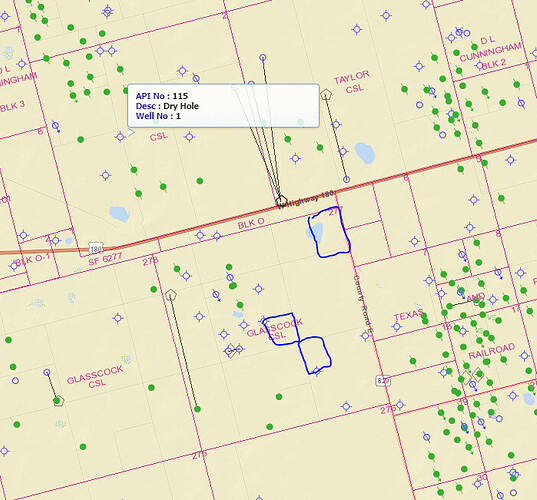 Their offer right now is $5000/acre. That’s the most anyone’s ever offered which makes me think they might know it’s going to start yielding soon. Thanks for the quick replies!

Hello Jacob. That is an aggressive offer. Most of the offers I’ve seen in the area are around $3000/acre. You have no wells permitted at the moment so you will not be seeing any pay anytime soon. Also, the horizontal well drilled a few miles to the west on your acreage was a bad well and was landed at the correct depth that is being drilled to the East. That is definitely an offer to consider.

Wow. Yeah I haven’t seen anything close to that. Must be that they think that CGS will bring wells towards the south. If you look at the RRC GIS I posted those wells pad location would bring new wells going south. Do y’all own a ton of acres or something? Maybe its because of the size of the transaction?

OK, so I don’t actually think that offer is as high as the above comments. There was an unsolicited offer (aka, low) posted on this forum a few months ago for $3600 a ~10 miles West of this property and that’s further from the current rig action (and we’ve seen a $10 rise in WTI pricing since then). CGS/EOG and Reliance Energy has had an impressive amount of success 5-10 miles southeast of the property and is slowly proving the acreage towards the property as viable reservoir. The Glass 277-1H in that League was drilled in 2015, which even if targeted the same (and even if it’s in the same formation, targeting methods to maximize fracture conductivity have improved since then) would have dramatically different completion techniques as technology has improved.

I’m generally bullish on Dawson County based on what I’ve seen, and that’s on top of the basin having a LONG record of production and discoveries.

There’s a spacing test happening in League 270 of Moore CSL. Spacing/density tests are a good sign for future development. It might not be this year you have a well on your land, but if a permit is even filed in that League 277 I’d expect you could beat that offer easily.

But yes, do you know how many net acres do you own? Size could be driving it up some.

We currently have a 25% lease which I know was one of the factors for the higher price. It’s for a total of 26.11 net mineral acres

And the offer is $5,000 per net mineral acre, right, not net royalty acre? As in $130,550 total? Just clarifying. 25% is good, but also should be standard for modern leases in the basin. Hm, 26 NMA shouldn’t be enough to drive up the price (don’t get me wrong, it’s still a good chunk of change, but I’d only classify it as medium size for a mineral transaction).

Yes that’s the total offer. The land has been in my family for generations so while it is a big offer, I want to make sure if I decide to sell that it’s a fair offer and I’m not keeping it go for a steal

Letting it go for a steal*

I think that offer is extremely fair given the circumstances surrounding the area. That is so much higher than we have seen, that it is top of the market currently. The real key is if you need the money now, then take the offer and move forward. If you don’t need it now then roll the dice that they drill y’all soon and the production is the same as the wells south.

Thanks for all y’all’s help!

Nothing says you have to sell it all could sell half and see what happens!

Sitting here thinking to myself if you want to sell since you own what they want I would tell the co. wanting to buy you will sell half for 75,000 shop around if you want. thats the fun part of this business

For mineral owners without a diverse investment portfolio, I generally like the sell-half/keep-half option. It allows owners to diversify and invest in lower-risk options, while maintaining the upside of the land being drilled. Owning a large chunk of minerals in one section is like investing in a single small-cap stock.

CGS Operating has offered us a 3 year lease with two year extension on the following interest: Section 51, Block 35, T6N. Dawson County. They are currently reviewing our attorneys lease. The current counter-offer is 25% royalty, three year, $500 pnma on 10 acres owned.

Has anyone leased to CGS?

I would agree with Tyler @Jacob_Plunkett , be weary of ppl telling you that 10 miles away they got an offer etc. Your neighbor across the street could get 25k an acre and your section may be heavily faulted and never ever get drilled. Immediate offsets are a much better gauge, 10 miles is a LONG way when talking geology.

Yes and no. For this specific instance, my opinion is 10 miles West is not too far for analogy because it’s regarding the active delineation of a very expansive reservoir. The analogy tract 10 miles away is parallel to the relative line of delineation activity rather than outside it, such as to the North (like if a house were two blocks down in the same subdivision vs two blocks down across a major freeway).

That said, just yesterday I also told someone I would put a low value on a parcel because it was 10 miles from activity and that’s “so far” that the chance of development is very low. I’ve also had to tell owners there was no way their land would be developed because the reservoir stopped halfway through the section before it got to their half (vertical conventional wells).

Relative economics like this is very situation specific, I agree. Don’t trust any one person’s opinion (especially on the internet, myself included!) but just use it as a data point to guide your own research.