The player here has to be a mid-major…too much land acquisition cost for a small company. The target appears to be deep gas, so maybe a major natural gas producer. This has the “feel” of a Chesapeake play, but there are other possibilities as well. 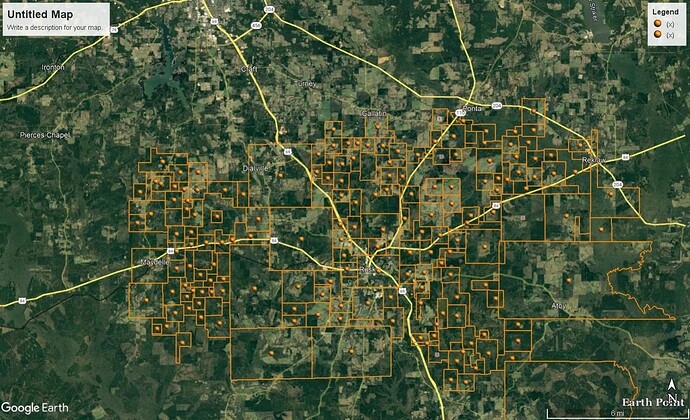 I realize this is a little off subject, but I notice you are using Google Earth Pro / Earth Point. How do you go about mapping several abstracts at once? For the life of me, I can only do all of them in the county, or one at a time, and I still don’t know how to save the map.

Key Exploration is just your typical prospect generator. A lot of these leases are “options.” I highly doubt there is any type of mid-major or large gas player involved here.

Jordan, I start by creating a folder under “My Places” on Google Earth. For example, for the maps I posted here, I have a folder named “Key Exploration 2021”. I then review the lease memos and gather the survey names/numbers. I look up the abstract numbers on Earthpoint and then hit the “Fly To On Google Earth” button. That creates an entry under “Temporary Places” on Google Earth. You then copy that entry into the folder you’ve created.

When you’re done, don’t forget to “Save My Places” before you exit Google Earth.

None of the lease memos I have counted here are options. It is true that many of the leases are subject to a two-year seismic option. However, Key is clearly not doing all of this work in the hopes that some company will be interested…running title and negotiating with mineral owners costs real money, so there is a another party involved in this.

As I posted, there is a lot of acreage involved here, and most of the potential appears to be deep gas. We will see what happens.

Alan, thank you very much for your help. This resolved a lot of frustrations.

Expect you’ve noticed a second company, East Texas Energy Corp, has also started recording leases in that same general area centered around Rusk where Key Exploration as been active. RRC doesn’t show that Key has ever permitted a well, and I only see one permit filed by East Texas Energy. It was in 2017 in that same part of Cherokee County we are talking about but that well, called the Gorko, ended up being drilled by a company called Buffco.

I’m thinking Key and East Texas Energy may both be surrogates acting on behalf of a larger company that doesn’t want their name exposed. But I’m wondering if those two are competing for leases in that same area or are working for the same principal.

East Texas Energy is headquartered in Houston, but Buffco Production that they appear to be working with is located in Longview, like Key Exploration.

Since 2009 Buffco has drilled 12 Cherokee County wells, all verticals, one called horizontal but really a redrill with a 1000’ directional kickout. Two of those wells Buffco drilled were just north of Jacksonville, but the other 10 were all in that area circling Rusk. Nearly all of them were completed in the Pettit formation, between 8 and 10000’. Two of of those wells that have been producing since about 2010 are so far showing cumulative production over 5 BCF, strong for a vertical. The more recent wells Buffco has drilled in that Rusk area appear to have been much weaker, to the point you wonder if they were only completed to hold acreage and because they were really used to delineate the area where that new leasing is now being done.

The other thing I thought was interesting is Buffco has only drilled verticals so far in Cherokee Co. but has a pretty strong track record going on horizontal Eagle Ford wells in South Texas.

Sure wish someone who has leased to either of these companies would share what kind of bonus and royalties they are paying and any insight they might have about their plans.

I received some info regarding the Cherokee County lease offers recently. Here are the terms that were presented to one mineral owner:

There has been a lot of variance in the lease terms, at least as shown in the filed lease memos. I’ve seen two-year primary terms with no extension and no seismic option, 2/2, 2/4, and 3/2.

Regarding East Texas Energy, it’s possible that they are working along with Key, but it’s also possible that they picked up intel on the leasing and have jumped in with the intention of flipping the leases to the company behind the Key leasing.

Thanks for sharing that. Most of the memos I’d looked at were 3/2 and indicated the seismic option was over and the lease was now in effect.

I think the answer is, some of those leases Key negotiated had a seismic option but others didn’t. Where there is no seismic option the lease terms are 3 years plus a 2 year option to extend. My guess is Key first tried for the drawn out seismic deal but if folks refused they agreed to a straight lease with an extension option.

I was also surprised to see in Texasfile that Key did considerable leasing in Cherokee County from 2010-2014, and in May, 2014 assigned a block of leases to EOG. I know you remember when EOG was putting together that Goodland Lime play in Smith and Anderson County they were also leasing on the west side of Cherokee through a bunch of small companies like Graem and Saline Creek. I’d be surprised if there is a connection between any of that and what’s happening now but it was interesting to see they had a previous relationship with Key.

Here’s a better view of our tract - see blue polygon below. 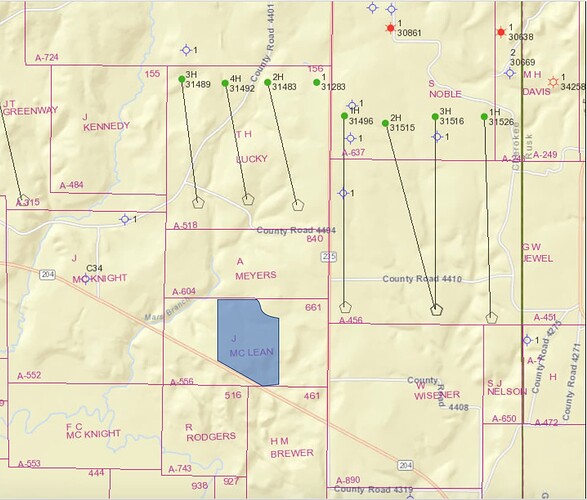 My family owns 60 net mineral acres in the J. McLean survey, A-556, northwest of Reklaw. The approximate location is identified by the blue circle in the first map below.

The tract is ~1/2 mile south of the Dickerson OU 2H, 3H, and 4H horizontal oil wells drilled by Forest Oil Corporation in 2012. Forest drilled these and four other horizontal oil wells in the Shankles and Carson units due east of the tract. All wells are producing from the Walkers Chapel (Pettit) formation. Sabine acquired Forest’s interest in 2015 and drilled on additional well to the northwest, being the Cherokee Trace Unit 1H. Crescent Pass Energy LLC is the current operator.

Our minerals were leased to Forest in 2012, but were never included in any of their units. The lease has since expired.

It appears Key has taken leases near our tract, but we haven’t been contacted yet. Based on the comments in this thread some are speculating they (or their client) may be interested in a deep gas play. Does anyone have contact information for anyone at Key to discuss a potential lease?

I appreciate the help! 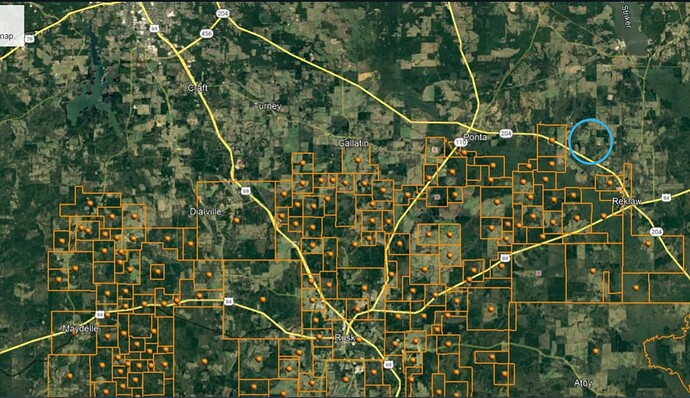 Tkeyes, may be a long shot if they haven’t contacted you but Key Exploration, which also operates under Maximus Operating Ltd. is at 903-753-0941 in Longview. At one time the guys handling land there were Charles Orr and John Rickman.

East Texas Energy Corporation was acquiring leases in your area also. Their number in Houston is 281-395-5161. Just speculation but both companies could have been taking leases for the same client that doesn’t want it to be public.

Both Key Exploration and East Texas Energy continue recording leases covering that same area running east-west through the middle of Cherokee County. The most recent ones filed by Key included 65 surveys and East Texas Energy’s were in 24, many that were the same surveys where Key filed leases. They’ve filed 100’s of leases since this activity started last year but, at least from the sequence in which they are recorded, their work appears to jump from one area to another rather than reflecting solid blocks of acreage being acquired. If that’s true there could still be lots of leases they hope to acquire, or they are satisfied checkerboarding the area in a way that would make hard for anyone else to drill.

505 leases in 194 surveys covering almost 52,000 acres (this may be somewhat high as it’s difficult to catch all the duplicate tracts)

East Texas Energy has recorded 38 leases during this same time period. I don’t think they are working with Key because:

I think ETE picked up some intel about a big project and decided to get involved with the intention of flipping some leases.

For now, I’m sticking with my guess that Chesapeake is the company behind this leasing. I checked the Cherokee County deed records, and during the 2005-2009 period, there are almost 2,400 recorded documents showing Chesapeake as grantor or grantee. Now some of those are ratifications, extensions, amendments, assignments, etc., but the bulk are O/G leases/lease memos. I spot checked the surveys involved, and most were in areas adjacent to Key’s current leasing area, but I did find a few surveys that are in the Key area.

During the 2005-2009 period, Chesapeake submitted 43 W-1s for vertical wells in Cherokee County, all of them showing planned depths of 12000 to 18000 feet, suggesting a deep gas target. Strangely, I found nothing when I did a Completions Report search. However, I was able to find a bit of completion info via the W-1s for a few of these vertical wells. I looked at three, and all of them were Travis Peak completions, so I’m going to extend my guess:

Keep in mind, I’m an amateur and I’m likely to be completely wrong! 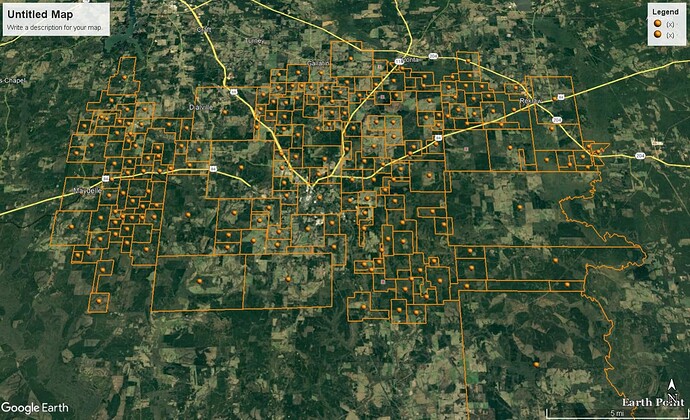 I think another possible candidate is EOG. I know they, along with many others, chased the Goodland Lime a bit north of this area 8 or 10 years ago. I wonder if they saw something while exploring.

We’re all just speculating but I’ll be surprised if Chesapeake is behind the current leasing.

I own interest in one of the vertical wells Chesapeake drilled in that area in 2008. It’s a Travis Peak that was dry gas, and not much of that, but continues to make enough to hold the acreage. I don’t think any of those wells were strong producers but Chesapeake never did any horizontal drilling there and the completion techniques have definitely improved. In 2015 Chesapeake sold all those Cherokee County wells to SND Operating. They’ve since gone through two more assignments and are now held by BRG Lone Star. Chesapeake was able to reorganized and come out of bankruptcy last year with some new financing but the drilling they are doing now is filling out existing positions they were holding in the Marcellus, Haynesville and Eagle Ford.

I’ve spoken to a representative at Key in regards to leasing minerals owned by my family. They’ve put together a large block of leases and are currently marketing their position. They’re looking for an operator of sufficient size and capital that will develop the acreage.

The play concept is to target the Middle Bossier/Haynesville - similar to what’s being developed further to the East and into Louisiana on the other side of the border. They claim it’s a multi TCF opportunity.

It is quite rare for a representative of a leasing entity to disclose exactly what the project is. Maybe this is one of the few times, but perhaps not.

I don’t buy the idea that Key has done all this leasing on a purely speculative basis…too much risk after a lot of land acquisition work.

However, the Middle Bossier/Haynesville play concept seems plausible. If this is correct, then you would think that one of the major players in the current Haynesville play might be behind the Cherokee County leasing.

Hope we get some answers soon!