Who Pays the Drilling Company With What?

I own a 1/240 share of a couple of new wells. I have always been confused as to exactly who pays the drilling company and how much for drilling the wells? Do they then get a share of the profits too? I only need a simple answer to satisfy my curiosity.

in the old days, an operator may have its own rig, so that would be a slightly different answer.

OK bear with me here, I still do not understand. How would the operating company get that money from the working interest partners and how would they get it back? I am stuck at the point of where it is all coming from. Seems to me that in the end we royalty owners are actually paying the drilling bill?

Royalty Owners pay none of the costs of drilling or operating the well. The Royalty Owners will get their royalty percentage of the production from the Operator when the well produces.

For example, if the royalty percentage is 20%, the Royalty owner will receive 20% of whatever the well produces. In this case, the Working Interest owners pay 100% of the costs and only receive 80% of the production.

OK, my sidewalk does not go all the way to the front porch sometimes. If mineral rights are owned by a group of people who get royalties, then how did your example get their 80%. How did a company ever get 80% of the mineral rights in the first place. This said, then mineral rights entirely owned by individuals would NEVER be drilled on then? The money does not just appear, it has to come from somewhere to pay the driller

The mineral rights owners grant permission for the well to be drilled when they lease their minerals to the Operator. The lease agreement is negotiated between the parties and specifies what the royalty percentage will be. If the mineral owner elects not to lease then a well can’t be drilled…

It gets more complicated when the mineral ownership is split up among multiple parties and some want to lease and some don’t. That brings in “pooling” laws which vary by State and can be complex.

FINALLY even the dimmest bulbs in the string came on! For instance I was confusing my 1/240 SHARE OF THE PRODUCTION with my actual share of the mineral interests. It all came together in reading your post. I can also finally see why the % offered in the lease can be negotiated. Once the lease is signed, it is forever in force at that percent as long as there are producing wells? I think I once read here that sometimes an operator of a well that is doing exceptionally high production will give a bonus to the royalty owners. Fact or wishful thinking? Thanks again for clearing up this misconception I was working with. Maybe we with so little knowledge should be prohibited from owning mineral rights.

Wishful thinking. As a perspective, if it was a not so prolific producer would you give a bonus to the operator? Good Luck to you.

This is an excellent booklet for the Oklahoma Royalty Owner.

After the frac job, the operator will set out where the perforations are in relation to each unit giving each unit its proportionate share of the total. In Oklahoma the Operator files that information with the Corporation Commission and it becomes public information when a final order is issued. The Division Order should provide that information.

It depends on several factors. First is there a unit so that all royalty decimals are calculated based on the acreage in each section or tract within the unit. The sections may or may not contain the same number of acres. NM has forced pooling and those are units. Texas may be unit if DPU is filed. The plat attached to DPU will note the relative acreage in each section or tract. Second, if it is a sharing well or allocation well, then most frequently it will be based on the total productive lateral (first take point to last take point) within each section or tract. If the final wellbore is 9,000 feet from FTP to LTP and 4,000 feet are in one section and 5,000 feet in other section, then allocation is 4/9 and 5/9 between the sections. This information should be available on the completion report and as-drilled plat. Sometimes there is an agreement to allocate the production 50/50 between two similarly sized section. Finally, no one uses number of perforations.

Tennis- Feet of perforations are used in Oklahoma.

Todd, Good to know about OK. This reinforces the reason to know the state where minerals are located.

OK Thanks, just what I wanted, this is a valuable resource for sure! OK, a theoretical question to complete my education: A horizontal well is two sections long. Unknown to the driller or operator, the first section is producing like gangbusters, but the second section totally missed any area with any oil. In this case the owner of mineral rights in the second section would get half of the profits, although he never had even one drop of crude?

Maybe a map would help explain my questions. In RED are my mineral interests. As you can see the drilling did NOT start on the section line, but South of it. Then we must take into consideration that the curve to horizontal makes some more unproductive land. My concern is if those factors would reduce my royalty checks appreciatively. One of these wells put out 32354 barrels of crude during the month of March alone, and they have permits to drill more in my interests.

You are in NM and wells are drilled under NMOCD pooling order to be shared by acreage. Wells are often drilled from off-lease locations, but all take points must be in the unit acreage. It is far more economic to drill the longer laterals and so operators will not drill short horizontal wells. Wolfcamp has oil throughout shale, although volumes can vary within county area. It is different from shallow formations where oil is in isolated “ponds” and so hit or miss vertical wells. Wolfcamp was not economic for vertical wells and became economic once horizontal drilling was developed. So some oil will come from each section. Not really measurable as it enters wellbore until the mixture is at surface.

Yes. A horizontal well probably doesn’t produce equally from from all portions of the lateral. It’s a heterogeneous mess down there. But like you say “unknown”. Maybe your footage is making more, maybe its making less. Operators are generally assuming that each linear foot contributes the same, it ain’t real cost effective (or even accurate) to try to figure it out.

How you will get paid is far far simpler than that. In NM the acreage dedication is kind of a “more or less” situation. For your Black Marlin wells they are dedicating them to the 320 acre strip that is the E/2 of the E/2 of Sec 18 and 19. That’s more or less what those wells are assumed to be draining. Blue rectangle below. Whatever part of your red is in that strip is what you get. Doesn’t matter if the first perf is right at the top of Sec 18 or further down. So works in your favor vs Texas where it would go off perforated length. Operators are going to complete as much of the lateral as they can, so they will try to perf as close to each unit line as allowed. You can’t complete all the way to the lease line anyhow as the assumption is that the first/last perfs drain a circular area, thus those are set 330’ from the line and are assumed to drain up to the lease line. So the NM way is more/less fair IMO.

(You can see that they kicked those wells to the east from the pad so the “curve” is not actually moving further from the north line, for whatever its worth. That way they can perf 330’ from the lease line instead of 1000’ or whatever if they did the build heading south).

You’re gonna get a bunch of money. The wells will decline. They will probably drill more in the E/2 of Sec 18 and 19 at some point and you will get more. That’s basically it. 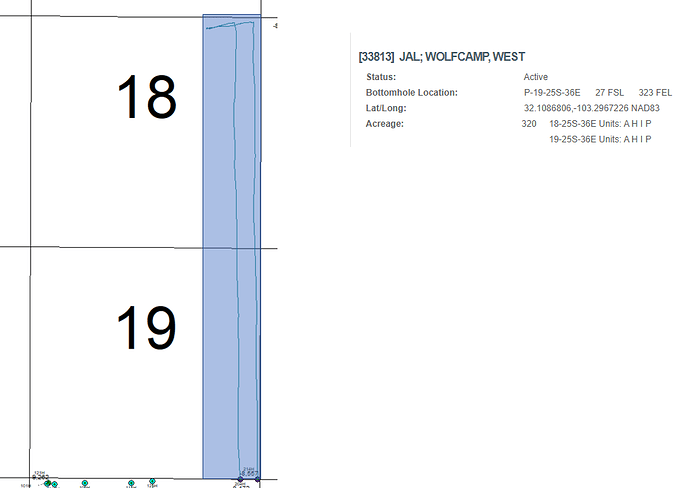