That area is probably more active than the rest of Washington County but everything seems to have slowed down in the last six months.

The most recent permits filed in that area were two Magnolia (formerly Enervest) wells approved at end of October to be drilled from the same pad north of Ledbetter in the T.G. Stewart Survey.

The lateral of the Giaccone-Lehmann 2H is supposed to extend west into the edge of Lee County bottoming just past Turkey Creek Road, and the Yellowstone 1H lateral runs the opposite direction toward Carmine.

Matrix completed two wells a little further west in Lee County at the end of last year and Magnolia drilled one called the Dunkin that bottom right at the County line. They permitted a second one that apparently hasn’t been drilled yet.

Dusty, Could you please provide the contact information to obtain drilling permit applications from the RR Commission again? I want to check on some recent applications in Washington County near the Fayette County line. TRB

Does anyone know if Magnolia has begun drilling wells from a new pad located in the M. Evans Survey, A-129 just North of the Washington Co./ Fayette Co. line? Drilling permits were approved in early October for 3 wells.

Tomas, they moved the rig in on that pad at the end of what the map calls Vogel Road more than a week ago. Probably the same one Magnolia used to drill the wells on Haystack Road that they are currently fracking.

I’m assuming the three wells you are talking about being drilled there are the Yukon A and C and the Liebshire #3. The plats are confusing but also appear to show a Yukon “B” well they are planning to drill from that same pad but haven’t permitted yet. Looks like a great area to be in.

Dusty, Do you know if Magnolia has started fracking yet? They filed survey reports at the RRC so I assume that means they finished drilling all 3 wells. Have you seen if the rig has been moved off the property? Tomas

Tomas, the rig came down a couple of weeks ago. Here’s what the pad looked like this morning.

There was no way to see the number of wellheads but based on that three row tank battery they put in you are probably right that all three wells have been drilled.

Equipment was still being moved in and no sand or chemical trucks were lined up yet so the start of fracking may still be a few days off. Doing three may take several weeks. Dusty, Anything new on these wells? Also I see that after several years of production the company changed the designation of one of our wells from a well designation of oil well to gas well on the RRC site. Does this have any significance? Tomas

Tomas, funny but I was in Carmine about noon and went by there.

It looks like they are about finished fracking. In the picture I took today I think you’ll be able to see Magnolia’s three yellow well heads I’m assuming are the Yukon A and C and the Liebsher 3.

On your other well, I don’t think it is unusual that the operator got it reclassified. There are breaks on severance taxes for gas wells producing from tight gas formations. All these Chalk wells are really gas wells with associated high gravity condensate/NGL production, some making a lot more liquids than others, but none that are really crude producers. Whether a well initially gets classified as gas or oil is based on the gas to oil ratio (GOR) it made in the initial 24 hour potential test filed with RRC. Over time the GOR on casinghead gas wells usually moves more in the direction of gas and by retesting the operator is able to get them reclassified. I don’t think it will mean anything different on how it’s being produced. Dusty, do you have any information about Magnolia drilling on the combined Miller-Schmidt Unit near there? As I recall, the Miller Unit was merged with the adjoining Schmidt lease to make an 800-acre unit for horizontal drilling.

The only thing I see related to that SWM Coop unit is the plat linked below that Enervest filed in 2014. Have you heard something about new activity there? If so the original one would have expired after two years and it doesn’t look like Magnolia has applied for a new one yet.

Think that second unit you mentioned being combined with the Schmidt-Weiss must have been the Mueller rather than Miller.

To Dusty or anyone following Washington County drilling. I just learned that Magnolia has filed drilling permits at the end of January for 4 horizontal wells from a single pad originating in the Broussard Unit. Wells Klondike Gold H02Kl, Klondike Trail H04KL, Klondike Rush H06KL and Klondike Mill H08KL. The first 2 showed spud dates at the end of January and early February. No spud dates for the other 2. If you are in the vicinity I would greatly appreciate a photo and any news you can provide as you did last year for the Yukon wells. Tomas Brossard

Didn’t realize they were already drilling. This pad is back on Moye Road and only the top of the rig is visible from that other well site. You can’t see it from 290,

Below is what was happening this morning. It looks like they’ve been drilling a while. Miles of blue water line have been run and the booster pumps are being set up to bring frack water from a permanent pond Magnolia has on 290 south of Carmine.

You probably saw if you looked at those four plats, Magnolia is drilling these as allocation wells in a combined 2,100+ acre unit that includes parts of the Broussard, Gupton- Schoenberg, Sprinkle and Roemer units. Got to be the most activity in one area in any of the adjoining counties. 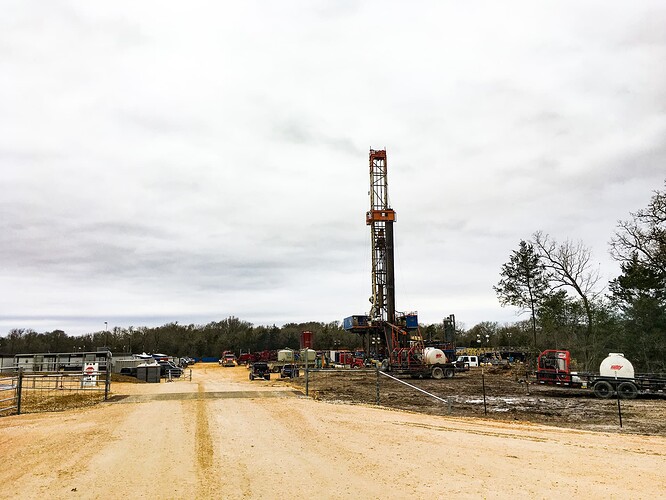 Is there any new permits for a well coming in on fm 390 west outside of Burton It’s new flags on the side the road and goes in to the place with a bunch more. It’s close to the Jimenez well amd the flowler well. But it’s on 390west across from the old Catcus restaurant in the sharp curves. I taught the property was in the Jimenez well amd the other one on that pad thanks

No new permits have been filed in that area, and you are right the 680+ acre unit Geosouthern formed for the Jiminez extends almost to that curve on 390. Their Fowler unit is further north and Chesapeake has a unit called the Madeline between the Fowler and the Jiminez.

If GS was adding another well in the Jiminez unit I’m thinking they would drill it from the same location off 1697 where they drilled the first one instead of building another pad off 390. I’ll be by there Friday and check it out.

It doesn’t explain the new activity Diamondh saw on the north side of Burton but Geosouthern made permit application with RRC today for three new wells they plan to drill as allocation wells in what they are calling the Boeker-Union Hill AW Unit.

The plats filed today show the new wells will be drilled from the pad GS built on the east side of 290 where they drilled the two Hielscher wells. The laterals for the new wells will range from 7300’ to 10400’ going west and paralleling the horizontal legs of the existing Boeker and Union Hill wells.

Correction on what I posted a couple of days ago. The new wells called the Boeker-Union Hill AW #1, 2 and 3 that Geosouthern recently filed permits to drill will be drilled from a new pad currently being built on the south side of 1697 about a mile west of town just past where FM 2780 branches off.