Any news on the progress at the Shelby wellsite?

Verdun filed permits last week for two more units east of Shelby extending into Washington County. The Ypres and the Jutland Units each include about 950 acres.

Assume that’s were the rig will move when the current drilling on the central Shelby pad is finished.

That new drill site appears to be on the pad constructed just west of Latium several years ago. It has some tanks but no wells were ever drilled there.

Dusty, what is the easiest way to access production data from the Passchaendele well on the RRC website? It’s not yet in the regular system, or I don’t know how to access it…

It is on the RRC site under the production report that is updated daily. The well and production data are still in the pending status for some reason. June’s production was a lot lower. I have wondered if the well was offline for some reason for part of June. Will be interesting to see what July looks like.

Thanks. I found the data. Verdun finally sent division orders for the Passchendaele Unit mid-August but they haven’t sent out payments yet. The RRC records indicate production in March. On the 2H well they are now drilling in the same unit do they have to send out new division orders or is that covered by the original orders?

When I was by Shelby last night surprised to see a rig already up on the pad next to Latium.

Obviously Verdun brought in a second one since the original Nobles rig is still drilling on their central pad. 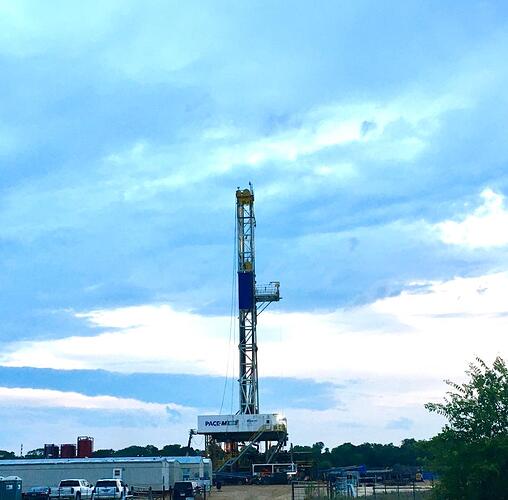 Has Verdun posted the July results from the Fayette/Austin County wells? I can’t find them on the RRC website. Any other news from the well site? Are they fracking the 4 new wells?

For some reason Verdun hasn’t reported July numbers to RRC yet. Will probably show up next week. In June they were still being reported under Pending.

It’s been three weeks since I was by there but doubt they have finished drilling on either pad. Start of fracking those wells could be a couple of months away.

The rig was still up on October 1.

The RRC website still has no updates on any of these Shelby area wells for the past few months. Is this normal for them? Eventually does this get squared away?

It is strange Verdun hasn’t reporting anything to RRC on these wells since August 12th when they posted their June numbers. RRC is showing that on Oct. 12th Verdun reported July production on wells they operate in District 1 & 2 that are also in pending status so I expect they’ll catch up at some point.

Verdun has continued reporting the sales from the Shelby wells to the State Comptroller. If you haven’t seen those August numbers the Tannenberg #1 was 473,297 MCF and 96 barrels of condensate, Passchendaell #1 508,239 with 65 barrels, Cantigny #1 332,257 with 62 barrels.

So it looks like production is increasing some on these wells. Is that correct? Over 500,000 for the Passchendaell would be its best month I believe.

Is there a trick to searching on the Comptroller’s site? I try by name and lease number and nothing comes up for these wells.

Yes the August sales shown for the Passchendaell on CONG were the highest so far. It looks like there must have been some down time in June when it dropped to 129,826 but then came back in July and went even higher in August.

So far the volumes for all of those wells are reported on CONG in the Lease Drop - Natural Gas Inquiry section under their drilling permit numbers, which RRC also calls their status number. For the Passchendaell #1 it is 872718.

RRC doesn’t issue lease numbers until the operator files a completion report which Verdun hasn’t done yet. After the lease numbers are issued everything will show up on CONG under those numbers.

Rig has moved from the Central Shelby pad and a truck mounted portable rig is working there. Verdun seems to move fast so the frack spread should be showing up soon.

The rig is still on the Latium site but they have a steady flare going. 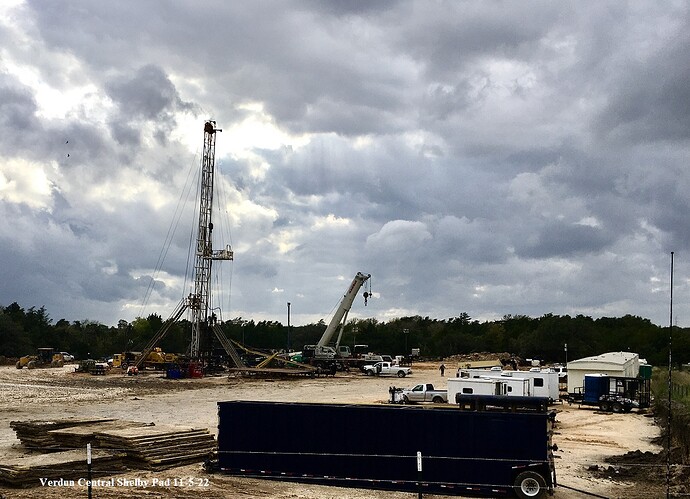 They extend down the east side of Mill Creek and are between the Gallipoli and Belleau Wood Units, that were the first Verdun drilled near Shelby, and the Ypres Unit near Latium where they are currently drilling. These new locations indicate they like what they are seeing in those Latium wells.

The new unit they call the Vimy Ridge is farthest north and covers 776 acres. The unit joining it on the south called the Mons is 1263 acres.

Are those on the RRC website now? I didn’t see them. Will it update and they will be there tomorrow? 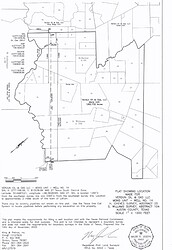