Question for those with more information and knowledge than I. Two new wells were drilled on my mineral rights, producing like gangbusters for several months. Suddenly the checks stopped, and in a few more days it will be FIVE MONTHS since the last check. There was close by drilling and fracking blamed, but I am told it don’t take that long. I am suspecting they are waiting for prices more favorable maybe? I checked with Tap Rock and the OCC but the wells thru Jan 31 just were not producing. Tap rock seems secretive about the reasons why. Any ideas?

If you want to share the section, township and range, then we can look up activity in the area or to see if the wells were sold to another operator. Also, check your division order to see if you signed with a minimum of $100 or changed it to $25.

A company may elect to shut in wells at sub $30 oil or something but oil averaged $80 from Oct-Jan. I cannot imagine a situation where they are just not producing the wells for $80 oil.

So we have a pad in Sec 18. Had your two wells drilled in mid 2020, online late 2020. Three other wells drilled right by them in Sept-Nov of 2021. Quite sure your wells were shut in due to drilling rig on location. Those new wells were fracked starting late Dec to early January. Frack plugs drilled out right after. Three new wells could have, in theory, come online in January. But no volumes in NMOCD. Maybe they had to upgrade facilities etc.

One would expect that ALL of the wells on the pad will come on at the same time. New ones and the old ones. Have you gotten DOs for the new wells?

Tap Rock has been reporting some small amounts of gas production on your wells to NMOCD presumably to hold the lease while they do whatever it is that they are doing.

In my experience its real dumb to go back to an existing pad and drill more wells IF you have any other option (i.e. build another pad an 1/8th to 1/4 mile away). Because you end up screwing up the initial wells. But that’s neither here nor there.

Either way mineral ownership is a marathon not a sprint. 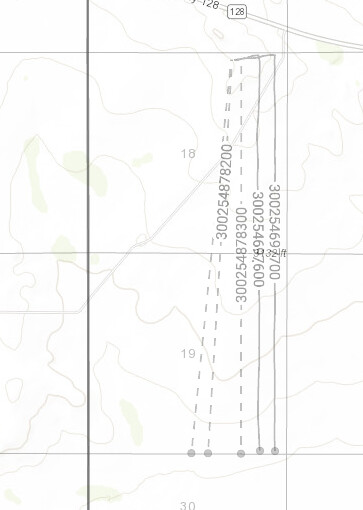 Thanks NMoilboy. Someone suggested that oil futures dictated the shut in timing. I am just a type personality that just has to know the where and why for no good reason. Probably perfectly valid reasons.

And to answer your question NMOilboy, yes I did get a DO for the new wells some time ago.

And the novel continues… From great producing wells thru mid October, suddenly and totally shut down thru the remainder of October, and all of November, December, January, and February. Tap Rock will not say why, but surely after 5 months (and probably more) of zero production, it seems that someone in the business would be aware of what is going on. March and April figures are not in yet of course.

Wow just reading your situation and it sounds awful. I depend on mine for income and it sounds scary that this could happen. I wish you all the best and hope this situation improves. Seems like the oil companies could set up a better situation for mineral owners. Don’t think they would like it if we shut them out.

I know you are just venting. It should be fine. Nothing you can do is going to change what is going to happen. Its hard to live a 40 year well life a month at a time, I get it. Especially with zero control. If you are dependent upon the money, then I totally get trying to figure out if the money will ever come again.

I live in DFW. I’m not real patient, if there is a big enough question I drive to Jal or Loving or Stanton or wherever and look. About once a year. Suck up the $100 in gas and do it. Don’t need an engineering PhD, just need a lat-long, a functional GPS, and be willing to ask the dude in a pickup truck who comes by some questions. Or the guy with the safety sheet at the entrance to the pad. Trust me, if you are wandering around on their pads somebody will eventually ask you what the bleep you are doing. I mean heck driving through the Jal man camps in absolute wonder/horror is probably worth the price of going on it’s own. Beats going to Galveston for the Xth time or whatever.

This is a risk business, sometimes things don’t work out but you and the oil company are aligned on a long enough timeline. The oil company isn’t bad or good or anything. They are just a company. That makes money producing oil. They aren’t gaining much by spending $9m a well and then electing not to produce to keep you from getting your $1k a month. In my opinion, your two wells will come back online when the new Black Marlin wells start producing. If they don’t, then Tap Rock has a bigger problem than you have.

Wonderful logical viewpoint !! You give us so much! The straight up answers and a philosophy that would do wonders to live by.

I really don’t need the money for anything, and as much as I would love to drive out there my 85 year old body don’t like that much. I wish I could! I am just a naturally curious person, and I guess I don’t like secrets. Seems like an honorable company would be pleased to inform its “partners”, good, bad, or ugly! Should I be concerned about the financial status of the company since there has been silence for so long?

Just about when I think I have this all figured out - wow comes a whammy! I got a big ol check from Tap Rock today and still cannot figure out why. Some of the 14 pages of figures are showing sales going back to January 2021! I had already been paid for that on monthly basis (I thought).
Is this normal? Could they have made a big mistake and are now correcting it? Did they sell it back then as stated and just now got paid for it?
I am happy to finally get a check from them, but am afraid to cash it since I feel I had already been paid for that oil. HELP!

It is totally possible that the long return is full of corrections. That happens frequently. Look and see if there are minus amounts and then plus amounts. They are possibly correcting for gas metering calculations, division order changes of another party, etc. You should be keeping your check statements for seven years for IRS purposes. So you could compare your old payments to these corrections and see if they are the same plus from the first check, minus on this one and then a new plus for the same month.

Thanks, but the plot thickens!! There are LOTS of minus signs, but NEVER a plus. New Mexico OCD reports zero oil production for lets use Jan and Feb 22. Zero. This 14 pages. however shows production for Jan and Feb! In fact even MARCH sales (at $111.20! I found it very hard for me to understand the royalty pages, I will see if I can add a photo of one of the pages so maybe you can understand what I cannot. 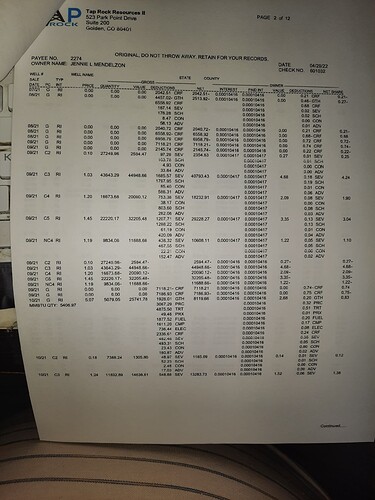 If you were a partner they would share the information as you would have paid for it. You are not. You can worry if you want to but that won’t change things. “Patients Grasshopper” comes to mind.

Look on the far right side-lots of minus numbers ad making corrections. They are splitting out the various components of the gas liquids Gas= methane, C2=ethane, C3=propane, C4=butane, NC4=isobutane. Looks like that are making corrections. I would be on my happy way to the bank…

Not only laughing, but singing and doing my happy dance all the way to the bank - and I WON’T give it back 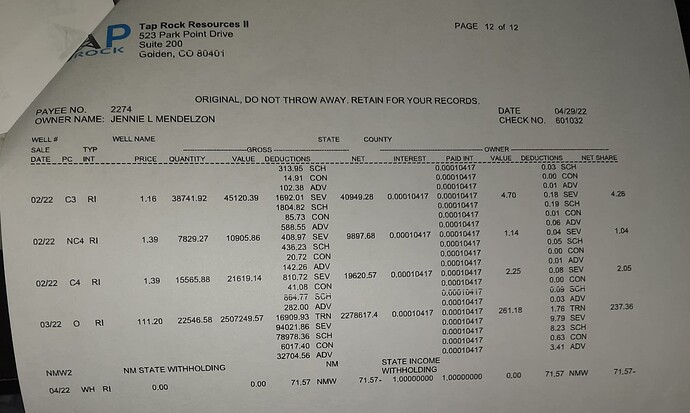 What I had been to believe was normal, was pay 60 days after end of month reporting, that was their method earlier. NM OCD says there was NO production of oil during Jan or Feb, yet we see they are reporting sale on 22 March for $111.20 a barrel, and Feb 22 for $92,74. Could they have been storing it from way last year and waiting for better prices? Could the NM OCD figures be way off by stating zero production?
M_Barnes April 30, 2022, 3:52pm #18

Sales are not necessarily in the same month as production for oil since it can be stored in tanks. They wait until they have enough for the jobber to come pick it up (or prices are better).

Todd the “grasshopper” comment went far over my head, had to look that one up, you are correct to call me that! I was not living in the USA during that period, so I had an excuse. More digging and I find the 14 pages cover not only the two wells that were producing, but THREE MORE wells that apparently came on line I guess. I recall signing some “authorization to co mingle funds” thing, apparently this is the first of having all five wells on the same sheet. Where is the NMOilboy when I really need him?

Hey Don, not sure what you need. Sounds like your main issue is resolved, your wells are back online. Here was my take:

So we have a pad in Sec 18. Had your two wells drilled in mid 2020, online late 2020. Three other wells drilled right by them in Sept-Nov of 2021. Quite sure your wells were shut in due to drilling rig on location. Those new wells were fracked starting late Dec to early January. Frack plugs drilled out right after. Three new wells could have, in theory, come online in January. But no volumes in NMOCD. Maybe they had to upgrade facilities etc.

One would expect that ALL of the wells on the pad will come on at the same time. New ones and the old ones

In my opinion, your two wells will come back online when the new Black Marlin wells start producing.

I assume that is what happened and that you are getting paid on all 5 wells now. All in the E/2 of Sec 18 and 19. Listed below.

On the sample of check details that you showed one of the wells made 22,500 barrels of oil in March. Presumably one of the new wells. Kind of amusing that the gross revenue for that oil was $2.5million dollars. For one month. Drilling wells in New Mexico is (currently) a pretty profitable business. With those kind of volumes nobody is storing oil to sell down the line. Don’t have the tankage on site. If you are not hooked up to an oil pipeline you are running in trucks mulitiple times a day to sell oil.

I don’t know what is up if you are getting paid for Feb volumes and there are no vols listed in NMOCD. Normally NMOCD will end up with more/less the same production info as your check, but that’s dependent on the operator sending in the data to the state and the state getting in put in the correct place. Sometimes thats not a perfect process.