Not sure where or why you are seeing duplicates. RRC well bore query shows only one location, one API and one lease for each.

History of Unit A1922 is more complicated as it was recompleted as a salt water disposal well. 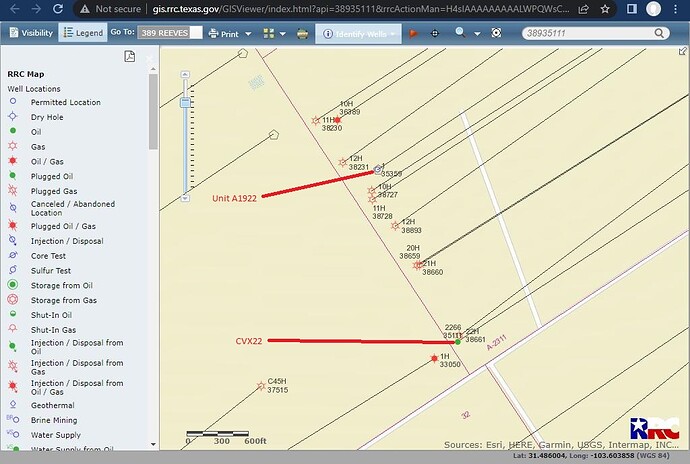 It is helpful if you include the API # for the wells. An API number is unique to a single wellbore - the well name, RRC Lease # and producing zone can change, but the API number remains constant. There is a wealth of information on RRC website - online queries which should be checked for updates and changes. If you open the RRC permit queries and enter 38935359 in API # at top right, four permits will appear. This is because of the original permit being amended several times. Well was first named State CVX 22 in filing Aug 16 2016. First amended permit filed on Sept 14 2016, under Remarks near bottom of page includes note that the well name was being changed to State CPV A1922 Unit # 2224. Second amendment notes that EXL had obtained 100% leases. Third amendment by Carrizo is for permit to convert to SWD well. State CVX 22 #2276 (389-35111) and State CVX 22 #2224 (389-35359) are two different wells. If you open the permit plats, you will see the different horizontal wellbore locations for each of these wells in Section 22. Completion reports will have plats of “as drilled” horizontal wellbores.

Thank you for your explanation and the map.

As you noted, the original Unit A1922 was a dud well… one of the RRC stored documents reports that it produced mostly water. The CVX 22 #2276 is producing, but it does not go into Sec. 19, and is all inside Section 22 as shown on the map and on the plat drawing. My understanding is that owning the minerals usually doesn’t include royalties from SWD wells, as this may be more a part of surface ownership.