Is anything at all going on in Reeves county as far a new leases or is it true that Permits for drilling are all in limbo?

My property (Section 19; Block 7 H&G RR; Survey A39) has two horizontal wells with Pioneer Natural Resources (formerly with Parsley Energy before Pioneer bought them out).

Have you seen any news about Pioneer planning any drilling?

I don’t see Pioneer listed on any the pages and didn’t see anything on their website.

If you don’t see any permits for Pioneer then I guess they are taking a break and raking in the dough.

On your question about whether “anything at all is going on in Reeves County as far as new leases”, the current leasing activity is definitely down from times passed but CourtHouse Direct shows 115 new leases recorded in Reeves County since the first of this year. That number excludes lots of lease amendments, ratifications and extensions of existing leases that have also been recorded.

On the other part of your question, about whether it’s true Reeves County “permits for drilling are all in limbo”, I’m not sure what you are asking there. The Railroad Commission shows about 90 new Reeves Co permit applications filed so far this year, excluding amended permits that would seem to be double counting if included in that total.

That’s less than half the applications filed by this point in 2020 (pre-Covid), and a high percentage of the 2021 applications are for 2nd, 3rd or later wells in units where there is already proven production, but 90 permits in 3 months is still strong compared to other Texas producing areas.

Dusty1, Thank you for your information. This is better news than we have been told in the last several months. Does anyone know of any way to advertise to let the Lessors/Landmen know that your land is available? Or do we just wait?

Thank You Clint~! Much appreciate your help~! So I’m guessing what I heard that this admin had shut down all drilling permits was not true??
Our lease ran out in Aug. 20 ~ I’m wondering if there is a way to get attention to find new companies interested in a lease ~hopefully that has means and desire to drill?? Any Ideas?? Our property is Sect 9, Block 55, Township 8, T&P Railway Comp Survey, A~208, Reeves County.

Generally it depends on a company getting interested in your area and contacting you.

Without knowing the size interest you own or the time you are willing to invest this may be off base, but some possibilities are:

That may not make things happen any faster but at least you would be up to speed when a new lease prospect contacts you.

Interesting report. Glad to see Chevron in the game. Question - if one’s lease is with Apache and Apache is no longer drilling in the area, would other companies look at acquiring the rights? Our family lease has 6 apache NG wells on it, but we were told it could handle more. Don’t mean to hijack and the question kind of follows the lines of the OP.

Thank You for this information~! Apache was our old lessee. Willing to do the work~! Much Appreciated ~!

Hey Mr Clint Thanks for posting the link to the permits. Seems the Odessa and Midland papers have dropped them. Last Oct during a bi annual trip to Reeves Cty I noticed a high voltage power line across I 20 about 20 miles east of Pecos. After touring the Verhalen area we started toward Ft Stockton on I 10. At Hovey road there was a large sub station under construction beside the road. To the north there was an ocean of solar panels. A friend told me there was more south on the Alpine highway. So, my question to everyone is has anyone been approached about acreage to put more solar panels or wind turbines on. Glad to see oil prices up again. CharlesJ

Hi Clint, I’m wondering if there is a map that I can look at and see which companies are drilling or getting permits close to my property~?? Sect 9, Block 55, Township 8, T&P Railway Comp Survey, A~208, Reeves County.

This may or may not help. 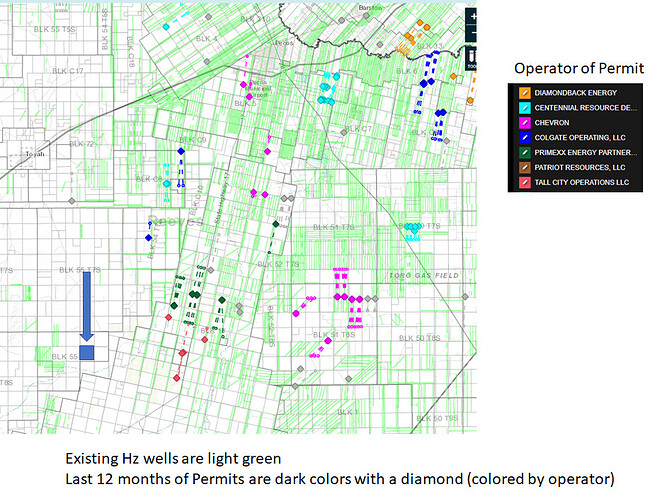 Thanks~! I can’t really see the info. Any chance I can get a Link so I can zoom in??

Hello Kizzy…I see nothing going on in the area for several miles around…sorry for the bad news.

GIS Map of Reeves County A-208 and surrounding area: 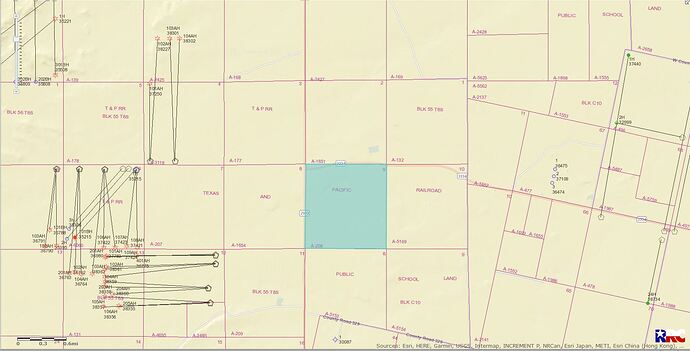 Below is the Railroad Commission’s map of your area. The wells west of you are all Apache and as you probably know they’ve curtailed new activity. To check out the details on those and other wells east of you here is the link to the RRC map site and a second link of instructions for using it. 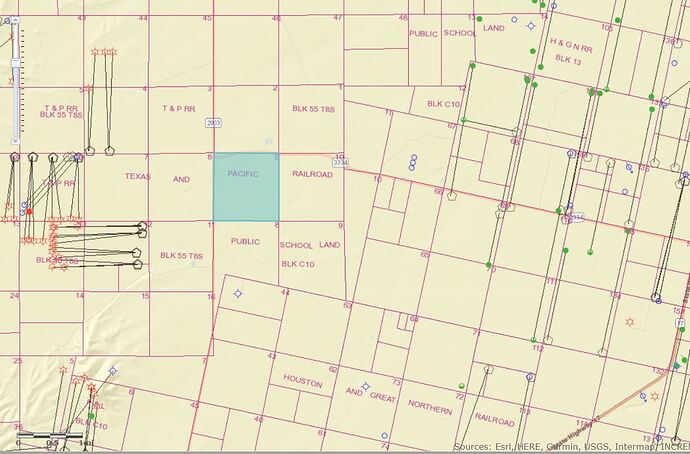 My lease with Apache ended this month. I am interested in starting a new lease with a new company. Does anybody have suggestions or information about who is actively leasing minerals at this time in block 13?

Hi Melissa, All I can say is with the help of all these Nice Folks, we are working on getting a release from Apache filed at the courthouse. That should open the door for other land men and companies who are looking in our area to know that we are available.

Dusty I have a question Where can I find extensions of existing leases recorded? I was offered 3K to extend a lease for 10 more months. They said COVID had hampered their ability to drill before the lease expired. I didn’t sign it, hoping to lease anew to another company and reap a large bonus. Wonder if I can lease to another company.

You can try searching the Reeves County deed records using the section and block information. Without knowing more about your minerals and lessee, it sounds like the operator intends to drill fairly soon and that is why the extension is only for 10 months. So you will need to work on finding another lessee pretty quickly. In general, there is less leasing activity and bonus rates are lower. Considerations are how likely you are to find another lessee and whether you are prepared for the possibility of otherwise being an unleased mineral owner in the well.