They hope to begin drilling soon. The surface casing was being set last week when I was on location.

Thanks Mr.B Do you know if they are drilling 1 or two wells? Mr. Helms’ office said they were drilling at least two. But That was some time ago. Is the surface location located at the Indultado surface site? Lindsay is a far piece from Fla.

I believe they will drill 3 wells. I more Mississippi well & 2 Woodford wells using different locations than the original Indultado well. I live in FL also but was back in OKC visiting family & friends so took a look see.

You can find the well locations on the OCC well records site. https://imaging.occ.ok.gov/imaging/OGWellRecords.aspx Type in Indultado in the Well Name box and you can find the current ones.

As I have not heard of any pooling orders being issued for these new wells, can I now assume that these wells do not exceed the 10,000 ft lease agreements for the original Indultado well? Thanks for the link!!

I believe there have been previous threads covering this section/unit about all the possible scenarios concerning the depths in this unit.

As I mentioned above, new locations are being built as we speak. I am not sure which of the 2 locations I was on are for which well.

Just an FYI, Casillas is no longer the operator. 89 Energy took them over along with a handful of other companies from the same private equity sponsor, Kayne Anderson.

That certainly answered my question. I shall now sit back and relax. According to the last letter I received from Mr. Helms, there seems to be ample reserves in this area for more wells in the future. Thank you Mr. B

Here are some diagrams that may help you visualize section 28. I am attaching some pictures which I hope will help you understand the situation. The first page is a type log from a vertical well in section 29 just to the west. It was used in the illustrations for the first Intultado well. The Miss target it in blue. I marked where a sample lease would hold down to 100’ (approximately) if that clause was in the lease. Geologists generally map in subsea TVD, so I have added that calculation onto the display since the next map is in TVDSS. (It means you have to subtract out the elevation of the surface location plus the Kelly Bushing above the rig floor where the log was measured from. Gets everything relative to sea level.) 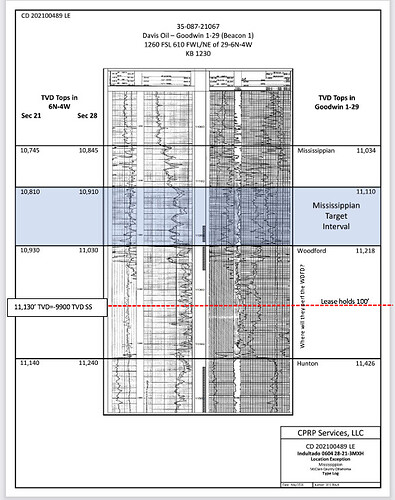 Picture two is the map of the Top of the Woodford from the OCC display. I have marked that -9900’ TVDSS on the structure map. I eyeballed in the 50’ depth markers but Word is not good for drawing well… Everything to the right is held by your lease. Everything to the left is open to lease/pool. I marked the new wells. #1 is on the left (Miss), #2 is next (Woodford), #3 (Miss) and #4 (Woodford-in red). Sample lease acreage is estimated in orange. I just showed the vertical parts of the wells, but they will turn and go uphill to the right in their reservoirs for the horizontal part of the hole. 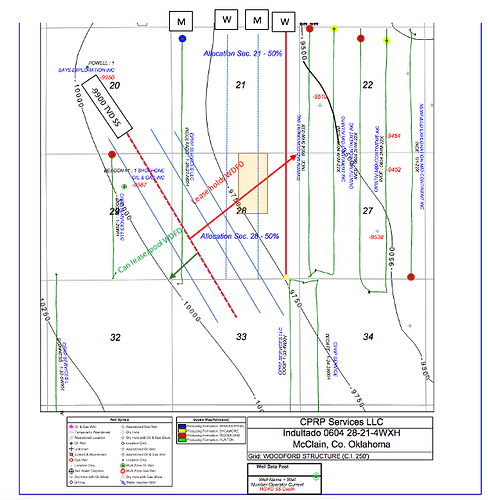 Picture three attempts to illustrate how the reservoirs tilt up to the NE. I used the log and tilted it to try to show that. The wells are shown on top. #1 holds down to -9900 TVDSS, so I drew that line flat since it is tied to sea level. Now you can see the wedge that is open to lease on the Woodford (green) and the wedge that is held by the first well (red triangle). I put the leasehold on top, so you can see where it might hold. Sort of a blend of 2D & 3D if you can wrap your mind around it. They need to pool some folks for well #2, but maybe not well #3 or well #4. One gets credit for wells #1, #2 and #4 even though the sample lease is not in their well paths because the spacing is 640 acres. Operator needs to pool the wedge of Woodford so that they can drain the entire 640 acres at that level. They may come back and infill with some more wells, but this is what they have listed right now. 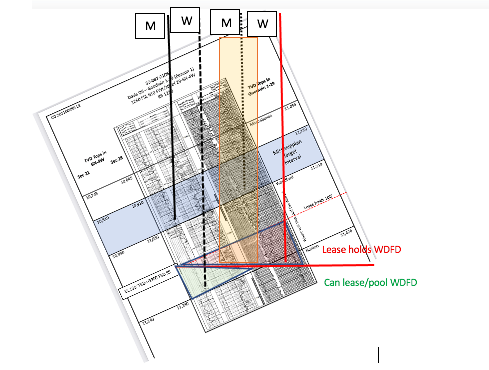 Hope this helps a bit.

nobs: Casillas spud the Indultado #2WXH (W=Woodford) well on July 27. As of August 19, the well was at 17,374’. I imagine they will reach anticipated total depth (TD) of 21,931’ in the next couple of days, barring problems. As I mentioned this is a Woodford well that is being drilled in the top 100’ of the Woodford, or within the “100’ below the base of the Mississippi formation” as shown on many of the original oil & gas leases. If & when Casillas decides to drill below the top 100’ of the Woodford, they will more than likely Pool those folks that had the 100’ depth clause, or something similar in the original lease.

I imagine Casillas will skid the rig 30’ and begin drilling the Indultado #3MXH (M=Mississippi) That will be the increased density of the original Indultado well.

With this information, you still sit back & relax.

Just an FYI, Casillas is no longer the operator. 89 Energy took them over along with a handful of other companies from the same private equity sponsor, Kayne Anderson.

Casillas is part of 89 Energy. Names will eventually get changed.

I received the Certified mail from CPRP for the Indultado 2WXH well a few days ago for Bonus payment options on the 2WXH new well. I assume that they intend to drill below the 100" depth of the Mississippi formation. (Oops, I broke the “no assume rule”) Should I expect a new lease to follow soon? As the letter also references a pooling order… might I expect that to follow soon as well? If a new lease is issued, I would expect that all depth clause verbiage would be eliminated. If so, would this be the last bite of the Section 21 6N-4-W apple? Also, the Bonus payment for 1/4 royalty is $400 per net acre? Is this pretty standard? Who sets this bonus payment amount anyway? I’m fine with it, but I am curious?

N- What Pooling Order does Casillas reference and what is the planned vertical depth and total depth? There won’t be a lease to follow, unless you chose one of their options, ie $400/acre & 1/4th. As to Casillas filing a new pooling application, that remains to be seen. This whole thing is confusing, as is Casillas, because they just reached TD on the 2WXH well yesterday and are setting producing casing. Bonus payments are arrived at from competition. With no competition, the bonus amounts will be lower. The more competition, generally the higher the bonus. At a Pooling hearing, the application (Casillas) will testify as to what they have paid in the area and are supposed to inquire from other lessees, what they have paid. It is somewhere near the truth, but twisted like the tail on a Pug to fit whatever they want.

Todd, you mentioned they TD’d yesterday and are setting producing casing - this seems like pretty specific information. Is this type of information available somewhere publicly? Very insightful, thanks!

The portion of the letter that references the Pooling Order reads as follows under the Options:

Option 1: Participate in the proposed test well by paying your proportionate share of the completed well costs. in the event that you elect to participate under this letter, you must also elect in writing to participate pursuant to the terms of the Pooling Order to issue or your election to participate WILL NOT be valid.

The above is the only mention of pooling. The words “to issue” is what made me think there would be an order to follow at some point.

And, yes… I do intend to select Option 5: $400/acre &1/4 if there is a new lease issued. I agree that it does seem a little late in the game to be issuing this letter or any Pooling hearing.

NoBS: Casillas will probably file a Pooling Application. Then there will be a hearing. Then an Oder will issue setting forth values, costs, etc. The respondents will then usually have 20 days to make an election. Or in the meantime, negotiate a lease with anyone else. Looks like they are about to skid the rig to start the 3MXH well.