This week OK Energy reported there are currently 88 active rigs in OK, as opposed to 137 a year ago. I’m wondering what the decline means, in practical terms, for those of us with mineral rights. For example, I own mineral rights to 4 primarily gas producing wells in Coal County, though it’s actually 2 horizontal drillings, with wells at either end. Are mine included as 2 or 4 in that 88 rig count figure? Or is rig count not the same as active well count. And what does the decline in total count indicate for the future generally? Of course, I know every individual well has a productive life that will end at some point, and that my own royalties will eventually run out, but are oil and gas deposits becoming depleted state-wide?

Here is my take for what it is worth… On the one hand, I am not super concerned about the downtick in rigs. For one thing, the efficiency is much better in the drilling times, so one rig can cover more territory and drill more wells in the same amount of days. What used to take a month, now may take 7-10 days.

Another point is that companies are being charged by the financial markets to work within their capital constraint, so fiscal discipline is really being seen this year in a fewer number of wells being drilled. Some can call that a negative, but it can also be a positive since companies have to tow the line and spend within their budget, watch their costs and gain in efficiencies. Those that are successful will succeed. Those that fail will not and will be swallowed up by the successful ones.

Gas prices are really down this year so that might be a cause for some backing off in count. If and when gas prices go up, then rigs may come back. Oil prices are somewhat down at the moment due to world wide tensions.

I can’t answer your 2 or 4 question without knowing where you are located. (Also the rig count is done as of a certain day, so it can vary from day to day.)

Resources are being drained across the state, but more are also being discovered, and some are waiting for better price points. Lots of wells yet to be drilled, but “where” depends upon the geology, the budgets of the oil and gas companies, their background funding, etc., and the product prices.

Thank you Martha. You are so helpful, as always. I think I just figured out the source of my confusion/concern, and this will reveal how little I know about the industry. I was mistaking “rig” for whatever equipment is at the surface opening of a producing well. Is the rig just what does the drilling operation, and is then no longer in place once a well is active? The wells I receive royalties from have been producing since I believe 2007 and 2009.

Thanks, John. That cures my confusion and concern.

There are also various types of rigs. There are small spudder rigs that move in for a couple of days to drill the surface casing portion of the hole which is fairly short. They do that and then move off to the next site. Then the big rig comes in to drill the rest of the hole. The big rig can do both, but doesn’t always. The frat crew comes in next with a different set up which is not considered a “rig”. The hydraulic fracturing actually takes the most time in completing a well.

Thanks. Very interesting… I found an interactive satellite view plat map that lets me zoom in and see the well heads, but I didn’t know exactly what sort of equipment I’m seeing. Actually there are 4 separate wells, but I can’t see a clearing in the vegetation and a well head on one of them. Diane

The well heads for active wells should be in a cleared pad zone and well taken care of. They may have what is called a “Christmas tree”-usually silver in color with a lot of valves. Most land owners prefer to have a fence around them so cattle, etc. don’t mess with them. Old wells can often be hard to find.

And what does the decline in total count indicate for the future generally? Of course, I know every individual well has a productive life that will end at some point, and that my own royalties will eventually run out, but are oil and gas deposits becoming depleted state-wide?

Diane: This decline is noteworthy in that many operators are lowering their capital expenditures because these horizontal wells are NOT producing what they thought. That translates to fewer wells to be drilled in the future. If prices for oil and gas go up substantially from here, drilling may start again.

And yes, oil and gas deposits that are known today are becoming depleted state-wide, at a greater rate than normal because of the technology being used today. Operators have been driven to produce as much oil & gas as fast as possible to meet the wild expectations they presented to their investors. Very few companies that aren’t publicly traded are still drilling wells. With the increased well costs, coupled with a very steep decline in production and low prices for hydrocarbons, only those playing with other peoples money, can survive. The venture capital funded companies are being pulled back from drilling more wells because income is not keeping up with expenditures.

One of the best indicators of future drilling activity is the presence of landmen in the court houses. The court houses in most Oklahoma counties are empty and hundreds of landmen have been laid off. The filings for new wells/units with the OCC are way down too.

As some of us in the industry say- “we have drilled our way out of another boom”. In my opinion, only higher prices or newer technology will bring about increased drilling.

You need to check the dates of the imagery. If you use a current version of Google Earth, the imagery date is across the bottom of the screen, right-aligned, as the first portion of text indicating date, latitude, longitude, elevation and eye altitude. Most of the imagery in a brief check of Coal County, OK, is from July, 2015, with some from March, 2018.

How often the imagery is updated depends on several factors, but how often an area is examined by users helps determine the frequency of updates. The availability of good imagery, with no or minimal cloud cover is another factor.

Thanks for explaining this, Todd. That sounds like a pretty discouraging situation for people whose careers are in the industry. All I’ll have to deal with at some point are my royalties running out when my wells run out.

Diane, in less than 10,000 words I can explain; ie.supply and demand. Oil and gas markets are vastly over supplied. We are victims of our own efficiency. There has always been boom and bust in the energy business. Seems like yesterday tank truck drivers were making $100,000/yr.

OK, one of my posts has gone missing. In an earlier post I mentioned a website I had found that let me have a really good satellite look with the plats shown, and spectralguy55 advised about checking the date on the image capture. So I wrote another message in this thread with a link to the site. It uses a Landsat image from this year and as you zoom in has overlays with the sections labeled with the range and township numbers. When you zoom way in it has another overlay that even shows land ownership boundaries. Although the site apparently will give you land ownership date for a fee, the part I was describing is completely free to the public, and struck me as particularly interesting and useful for mineral rights owners.

I have absolutely no connection to the website and my message was in NO way an advertisement of it. It clearly followed quite logically in an already established thread. My post was indicated initially as subject to review, which was perfectly fine with me, and for a day I could see it on my screen as part of the thread, but labeled as approval pending. It has now completely disappeared.

This irks me because, as I said, it was not an advertisement, the site is free and in a useful format. Any suggestions as to what I might do now? Do I try to contact whoever manages this forum?

I would really appreciate getting to that site to see our area.

where did you find the satellite map? 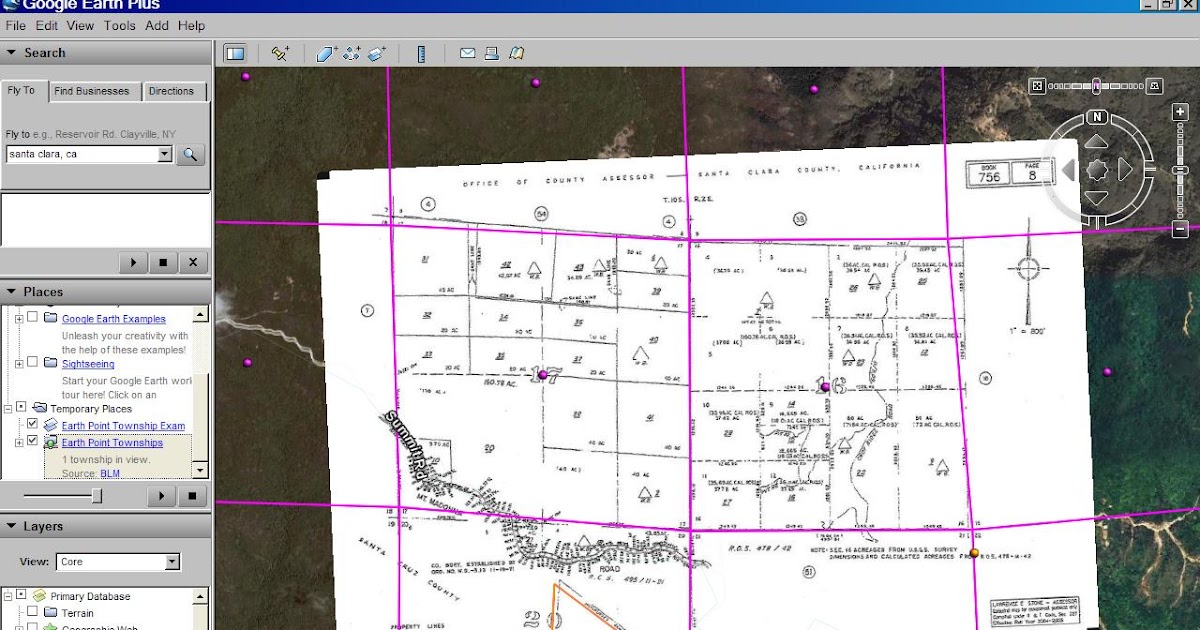 A few months ago I was asked if I could overlay a parcel map onto Google Earth. The property was in a rural area south of San Francisco. Sin...

I’ve been trying to post it, but initially my post was not approved. I attempted to contact the forum administrator, but it turned out the contact link was broken. This has all taken several days at each step. It’s been corrected now, and I’ve asked him about posting the link. I’m still awaiting an answer. I have no idea if this post will o through to you all.

Just pulled that up and find that you have to buy a subscription to use the service.

I wrote to the administrator on 8/12 about the message I had tried to post here with a link to a useful website, explained the situation and asked why my post was not permitted, since I don’t think it broke any forum rules. I’ve still not had a reply, but maybe he’s on vacation.

I believe I can send private messages to members, so if I don’t hear back from him soon, I’ll send the link individually to those of you who’ve expressed interest.