I’ve recently poured myself into learning/trying to understand this industry so I can advise our family members how to best proceed. ANY help or advice is VERY appreciated!!

Background: A lease in my grandfather’s name was signed prior to the declaration of pooled unit. 2 years later, Pioneer’s title opinion found (unknown to other heirs) that the owner (grandfather) passed away 3 days before lease was signed so it had been signed by his son (same name/initials). The landman told me, “We need ratifications from the heirs, as the son was only able to lease his part, not everyone’s. At this point we consider all other heirs to be unleased on those tracts. Pioneer can honestly treat this as a captured interest, ie. the revenue is absorbed by Pioneer rather than paid out to the mineral owners. They are trying to do the right thing here, as it was originally booked in as being 100% leased in the subject lease… this is something that we need to either get resolved or inform Pioneer that it will remain an open interest.”

I’m not sure if remaining unleased may actually be better than ratifying. Pioneer will not verify BPO vs. APO status and I don’t know how to find this information. There are currently 9 horizontal wells in the unit that were drilled & began producing in 2020 (total production BBL range from 200,000-999,000 BBL but average for the 9 wells is 711,000 BBL). The 3 highest producing wells (each with 999,709 total lifetime BBL production) are the only 3 where the horizontal wellbore passes directly below grandfather’s house (on the 1.269 gross acre tract).

Is it better to just ratify for 25% or remain unleased?

Here is the declaration of pooled unit if it helps! Thank you in advance! 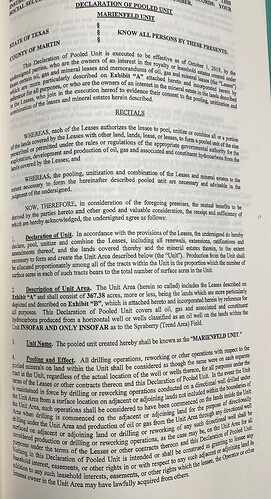 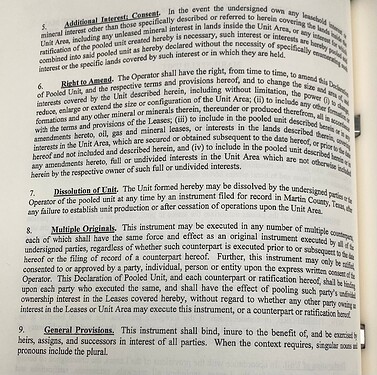 I’d normally suggest you post your question under the Martin County section of the forum but saw your earlier post there.

Regarding the payout status, the only way to determine that is by contacting the operator, and since you aren’t currently under lease they don’t have any reason to provide you that kind of information.

From the information you posted here I think there may be some confusion about which wells your family might own interest in. You mention a lease being signed before the declaration of a pooled unit but from what RRC records show there isn’t a pooled unit. RRC shows there are 9 wells producing in the west 1/2 of Sections 13 and 24 but each of them were drilled as allocation wells with stacked laterals. That generally means the well bore has to actually cross the tract where your mineral interest is located for you receive royalties. In case you haven’t seen it I’ll attach a link below to the plat filed with the permit for one of those wells. The last two pages with the plat show the ownership breakdown which may help you locate your interest relative to the path of the various laterals. To see the individual plats showing the path of the other 8 wells go to the drilling permit section of RRC’s site.

If you haven’t already, you might search the forum for previous posts discussing pro’s and con’s of going unleased in allocation units. To search put those key words in the looking glass feature at the top of the page. With a small interest that’s divided between multiple family members I’d be inclined to ratify the lease but others may feel differently. The part that didn’t sound right was the statement someone made to you that Pioneer could absorbed your interest. At the worst I think those proceeds would be escrowed and if the well reached payout would end up going to the State if it wasn’t claimed, but that’s a legal question.

I can’t thank you enough for your response!

I had not yet discovered the plat records and greatly appreciate the recommendation! I’ll pull up the other 8 to take a look. Our 3 tracts are listed in the ownership breakdown that you attached. What’s confusing me a bit more now is my misunderstanding if these are a pooled unit. I’m sure you are correct bc I’m still trying my best to learn as I go, but the tract numbers and respective acres in the attached plat ownership breakdown correspond 100% with the Marienfeld pooled unit ownership breakdown as well. Would you happen to have any insight into why this may be?

You are 100% correct, I was confused about the production (again thank you!) When I look at my excel sheet with each wells API, I can see where the production is exactly the same (3 wells, 3 wells, 2 wells & 1 well) making up the four leases you cited which would change the numbers I was going off of trying to ballpark APO/BPO.

I will certainly search and read through older posts regarding pros/cons of unleased. I wasn’t sure if unleased (payment/ability/terms) changed whether or not the wells are a pooled unit.