My 3 year lease with Centennial expired in May 2021. Section 271 Block 5, Toyah Valley Grape & Alfalfa Co. Subdivision Block 13 H & GH RR Survey I have not received any offers on a new lease from anyone. I was wondering what might be going on with other mineral owners in that area. Any help will be appreciated.

I think that Centennial has been paying oil realties for that Section. Have you been receiving royalties during the term of the lease? If so, the terms f the lease have been met and they don’t have to renew the lease. I’ve been getting royalties from Centennial in this same area I think.

I received a bonus payment for the 3 year lease that ended May 2021 but never received any royalties during that lease time frame.
Section 271 Block 5, Toyah Valley Grape & Alfalfa Co. Subdivision Block 13 H & GH RR Survey Lots 5 thru 8 and would like to know if these sections have been drilled.

Your mineral interest appears to be in the path of a horizontal allocation well Oxy permitted called the Young 13-0-270-271 C, Well 83H. Attached below is the unit plat. RRC is showing it was spudded 4/5/21 but a the completion report hasn’t been filed yet.

Try contacting Centennial’s Owner Relations Department and tell them you need to confirm drilling operations have extended the base term of your lease or if not that you need for them to provide you a recorded release. 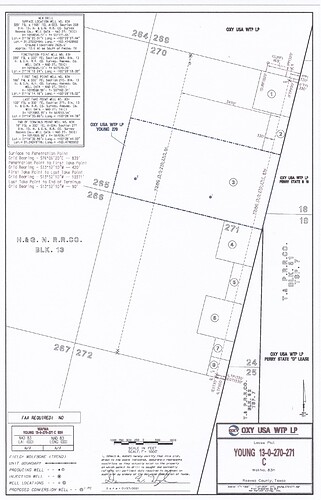 I received a Pooling Agreement for that Section this week. Pooled unit with certain lands covered by the Lease, being all of Block 4, Lots 7 and 8 of Block 6, Lots 5 and 6 of Block 13, the East Half of Block 11 and Lot 5 of Block 14 of the TVGAC Subdivision of Section 271, Block 13, H&GN Ry. Co. Survey… All I know is that Oxy is drilling in this area and that’s what I was told

Brenda, since William said his mineral interest includes Lots 5-8 of Blk 13 of that subdivision in Sec. 271 sounds like at least part of his interest should be covered by that same pooling agreement. Did the agreement you received come from Centennial or Oxy?

I’m interested what you got was for a pooled unit because I thought all the Oxy wells in Sec. 270/271 were permitted as allocation wells.

It’s backdated to April 13, 2018 and the Lesee is Double Eagle on Page One. The name of Lesee on Signature Page is Fortuna III Permian, LLC The guy that contacted me from Fortuna for mailing address said it was for Oxy

I did hear back from Centennial. This is their reply: “We entered into a Joint Operating Agreement with Oxy to develop the acreage in Sections 270 and 271. Lots 5-8 of Block 5 in your lease was traversed by the Young 13-0-270-271 C Well. This well spud in April and was completed in June after which it started producing.” I still have an expired lease. Is there anything else I need to do at this time? Thanks. Wayne

You said earlier that the term of your lease extended until May, 2021. If Centennial says your interest was included in a unit where a well was spudded in April, 2021, and it was completed in June, then your lease didn’t expire. Assuming your lease includes typical wording, the initiation of drilling operations during the primary term will continue the lease for as long as that well, or future wells that may be drilled in that unit, are producing.

Unless for some reason you feel what Centennial told you about drilling operations beginning before the expiration of the primary term isn’t correct, it sounds like your lease is now HBP (held by production) and you can expect a division order and royalty payments to be coming in a few months.

thank you for your information.