I’m curious to know what everyone thinks about this. Have bonuses dropped that much in 4 years? What would be a reasonable counter-offer based on my previous lease and current rates? It seems like such a low-ball offer that I’m concerned we won’t be able to strike a deal - and if we don’t, what kind of risk am I taking? (I don’t want to be taken advantage of, but also don’t want to stupidly walk away from a decent offer.)

im sure it is a low offer if he called you they usually try to steal it early on im sure a response from NM Oilboy would give you some insight. GOOD LUCK !

Keep us updated with anything you learn. I’m interested to know. Thanks

Without really getting into geology and maps and whatnot, let’s just accept that 17s38e is not great acreage. I don’t know if it’s even non-zero acreage. On the margins of the Central Basin Platform and Delaware without being in the historically productive areas of either. I really don’t know what anyone would specifically be trying to do there. Rank speculation on the San Andres maybe?

As far as leasing comps go, the NM State Land Office and the BLM (pre-Biden rulings) have had lease sales in this general (I mean similarly on the margins but up to 20+ miles away) area in the last year. Here is a rough table of what I found. The red ones are the closest. These are 20% five year leases (SLO) or 12.5% 10 year leases (BLM). I didn’t try to dig in to see who the winning bidder was. I’d say $100/acre and 3/16 is pretty much inline with those numbers. Can always try to get more. Best of luck. 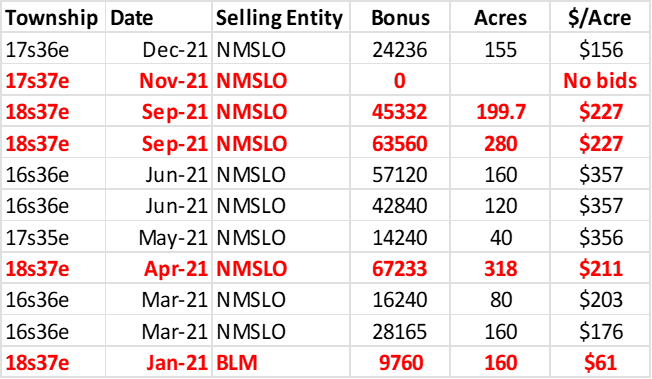 Thanks for your reply. We don’t own a lot, and it’s not the best locations so offers are relatively rare. That said, all offers we’ve ever gotten started with a call from a landman, and all (so far) turned out to be worth our time. However, the way this one was ‘framed’ definitely felt odd. Proceeding with caution.

Thanks NMoilboy. I don’t disagree with your assessment of this tract’s potential, but interestingly it has been the most lucrative of all our holdings! Go figure. Your insight and the sales info you provided are much appreciated as we go forward.

Standard OlField Leasing with an ‘add-on to extensions’ are 25% royalty, a 3 year term and a Pugh Clause.

This 3/16 royalty, is a new ‘buzz word’ floating around amongst the deal maker crowd. Stick to the American Tradition, 25% royalty. Sure, things are getting tidy and the landman want them as cheap as possible. Even with the price of oilgning up, it still cost a lot to be in the oil business-speaking from experience.

Your location is right in the middle of the il field, I wouldn’t do anything for less than 500/nma. Cheers!