Own property in Section 26, Block 51 Reeves County. Does anyone know what the current bonus rates are for lease extensions. Also any background on Noble Energy. Interested to know of any activity in this section/block.

Maybe this will help - the section I’m referring to is in Township 8.

Since you mentioned Noble I’m figuring you are in Abstract 2788. See if the map below looks like the right area. Looks like the one well that was drilled there in 2013 wasn’t strong enough to inspire more action, but activity could be picking up particularly in the sections that join you on the south.

COG permitted several wells there in the middle of last year and they may be completed by now. Occidental has wells to the east and north of you that have been producing since 2012 but hasn’t filed any permits recently. It looks the well Oxy has in the section at the northwest corner of Sec. 26 has been averaging 30,000 barrels a month for 7 years so it’s hard to figure why they haven’t drilled more.

Noble is a big independent that bought Clayton Williams in 2017 for $2.7 Billion and seems to be pretty aggressive on drilling in Reeves Co.

Don’t have any ideas what lease extensions are going for there but, depending on how much acreage you have, it might be worth checking with COG to see if they are interested before resigning with Noble. Thank you Dusty and Rick for the information. Have 320 acres all on the east side of block 51. A2788 is correct. Have been offered 5K/acre but hearing the number should be higher. Appreciate the reference to COG. Do you have a contact you would recommend along with number/email.

Again thanks much for the info.

COG is a subsidiary of Concho Resources. Not sure how they divide up the county but the two landmen (landpersons I guess) who handled Reeves are Lizzie Laufer and Laura Paige Innerarity who are both in their Midland office (432) 683-7443. If you prefer to email you could call that central number and ask for their address.

Thanks you - Ill give them a shot

Hello Dusty - hope all is well your way. Checking to see if you are aware of any drilling activity in Reeves County. Getting a lot of calls to purchase mineral interest. Own E/2 Section 26, Block 51, T-8, A2788. Appreciate any insight you have to current going ons.

It looks like a lot has happened around A-2788 in the past two years. Below is the current RRC map of that area. If you compare it to the one I posted in March, 2019 the green dots that replaced the blue circles indicate 4 out of the 6 wells COG had permitted just south of you in the Sec. 34 and 35 have been completed. That’s called their Rising Sun Unit. Since May, 2020 when the first of those wells started producing COG has reported combined production from that unit totaling 821,000 barrels of crude and 1.27 BCF of gas through 2/21. Conoco Phillips recently completed their acquisition of Concho so I’m thinking more wells should be coming.

In October, 2020 Chevron completed their acquisition of Noble Energy that had been pending since July, 2020. Since then Chevron has permitted nine new wells that extend through Sec. 14 which is only one section north of your Sec. 26.

To the east of you Oxy recently sold some of their Reeves County acreage to Forge Energy that included the existing wells they had just east of you in Sec. 30.

Any of those changes would probably be enough to explain the inquiries you are getting.

Did your lease with Noble expire, or are you held by production? It looks like the well Noble, now Chevron, has in the other half of Sec. 26 is at the end of it’s life. 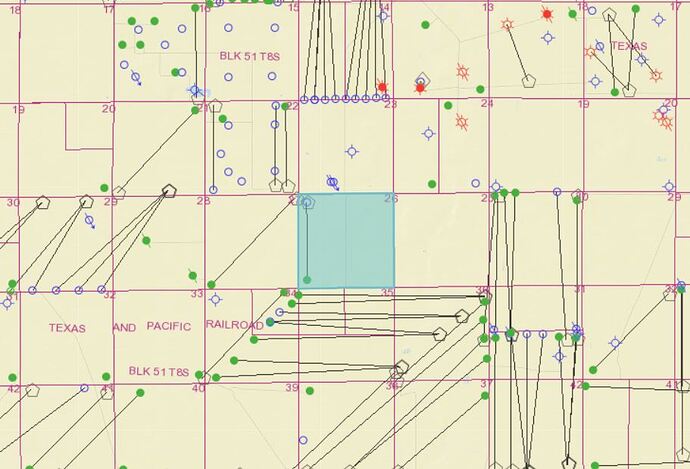