Learning about my minerals

Received offer to buy mineral rights I inherited. Section 24, Block 34, T3N How do I find more info about the land?

@LoriRiggs You can go to the RRC map to find where the property is & recent well activity (https://gis.rrc.texas.gov/GISViewer/). Is there something in particular you want to know?

Also, I clicked on the RRC link, but clueless as to how I find the property.

-At RRC site go to GIS Public Viewer map. -Then “counties” and go to Howard. -Zoom in -Howard County is very jumbled. -It appears your land is in the top, northwest corner of Howard County, two sections down from Borden County line. -Some of section 24 is in Martin County. It says Blk 34 T3N in Martin County but the county line is irrelevant, (I think). -some wells, (green dots) say Callon Petroleum

Several members in my family were contacted out of the blue and told we were heirs to mineral rights. None if us knew about this. We received offers to sell with 5 days to return paperwork. Just trying to find out more info. We are feeling very rushed and don’t want to make a bad decision under pressure.

Do not let anyone rush you. Find out what you have, any past royalties that are due you and any future drilling that may be about to happen. Get the title cleared up and then make a decision.

Like Ms. Barnes said. Don’ be rushed. That’s an old sales tactic ( do it now or you will be sorry). You can rest assured that if you have anything there, it’s worth more than what they are offering. If you don’t know, start by asking who you are an heir to? There are a lot of people on this site that will help if you can get more information, and don’t be afraid to ask questions. Good luck.

Where/how do we start?

(post withdrawn by author, will be automatically deleted in 24 hours unless flagged)

Previous posts have given you a lot of good information. To give you a jump on your research below are a couple of things you’ll find when you follow the steps that Lee Ann and Dogslobber suggested.

First is RRC’s map with Sec. 24 outlined in red. Next is a plat Callon recently filed showing their Chaparral Unit A1. In February Callon got permits approved to drill three horizontal wells there called the 8AH, 15SH and the 21H. This plat shows the proposed path of their 21H well but all three wells follow the same general pattern, starting from a surface location in Sec, 25, extending across your Sec. 24 and then on north to the upper boundary of Sec. 13. That unit covers a total of 582.6 acres in parts of the east side of those three sections. You will need to pin down which part of Sec. 24 your mineral interest is located in to determine if your interest is included in that unit. RRC records don’t indicate whether Callon has started drilling any of those wells yet.

On the RRC map the green dots in Sec. 24 are wells drilled about 10 years ago by a company called Big Star but are now operated by Callon. The green dots are still producing but the dots with a line through them are wells that have been plugged and the blue circle designate a well that was permitted but not drilled.

There appears to be a lot of past and anticipated activity in that area. Like others have told you the logical approach seems to move slowly and learn all you can before making any sort of commitments. 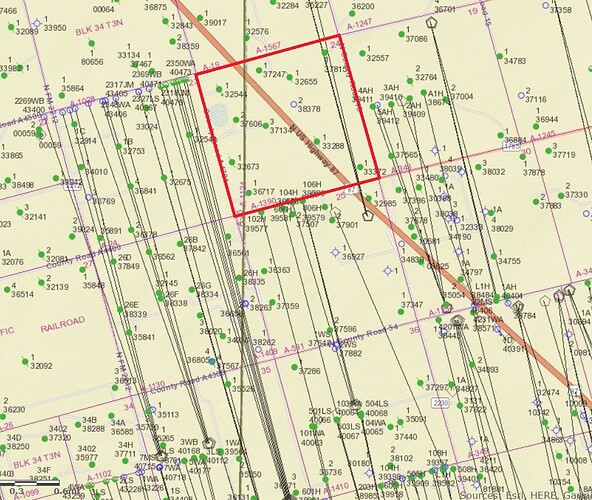 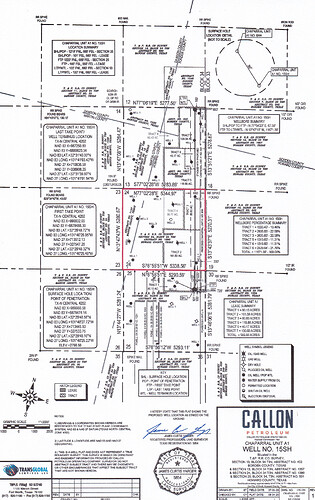 Thank you for the info. As for location, I only know what is on the papers I received which says Sec 24, Block 34, T-3-N, A-1390. I need to figure out how to get some type of paperwork/deed/title or even something that shows or explains how I’m an heir I think. Not a clue where to begin with that - what makes it even more difficult is I’m in California. Ugh.

Ask the person who made the offer to you. How did they find your name? Who do they think you inherited from? How many other heirs are they finding? What are their names? Ask them what you would have to do to get a clear title chain. Ask which portion of the section 24 has your minerals. That will get you started. Given that information, then you can contact a probate attorney in Texas and get help from them in clearing your title and getting all the documents. If you all stick together and do the work at the same time, you can share costs and the benefits of the new wells.

Thank you so much for the information!

If you have a guess at the name of the relative you inherited from, if you post it here someone might be able to help you research the Howard County deed records using TexasFile or one of the other free deed index sites.

You might be interest in this link to recent comments in another part of the forum by someone who was in a similar situation, just a different County, and surprised by a lease offer rather than a purchase proposal.