I would welcome comments from anyone who has signed seismic options or leases with Key. Also, has anyone observed any seismic activity?

There 212 leases that don’t have seismic options attached to them, so the primary term clock is ticking…

Interested in your opinion on the permit and plat below that Maximus Operating filed today. I’m thinking this Vallier-Sessions #1 is the first well to come from all that Key Exploration and East Texas Energy leasing we’ve wondered about for over a year.

The LeaseAlert dated 9/9 included a lease from Zakiya Vallier to Key covering seven small tracts in the J.M. Musquiz Survey A-37 some of which look like the tracts shown on the plat Maximus filed with this permit. That location also is pretty much in the middle of the lease block they’ve put together.

They applied for a vertical well with a 40 acre unit but permitted it for five potential zones, the Woodbine, Rodessa, Pettit, Travis Peak and a 10500’ Wildcat. Maybe they plan multiple completions but it could just be a further attempt to keep their real objective hidden. The permit reminds me of those two Anderson County wells a few years ago that turned out be EOG and were viewed as being research wells in advance of horizontal drilling.

The forum administrator kept closing the earlier posts about those Key leases but in looking back over them I found one I had forgotten about in February where responding to a question by Tkeyes I said “may be a long shot if they haven’t contacted you but Key Exploration, which also operates under Maximus Operating Ltd. is at 903-753-0941 in Longview.” Tkeyes later posted that a landman for Key who he contacted told him they were putting this lease package together to market to an operator. I’m thinking that might still be the case but Maximus has decided to include some vertical research in their package, or they are still fronting for the real operator who put up the money for all those leases. 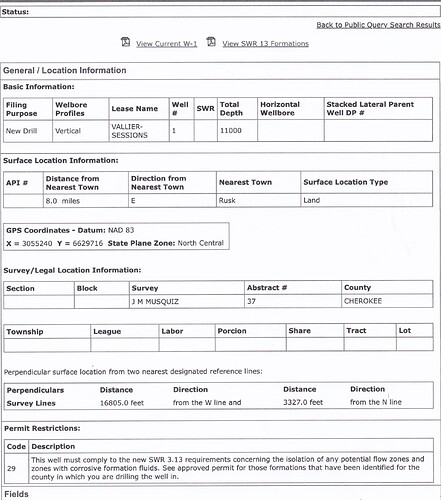 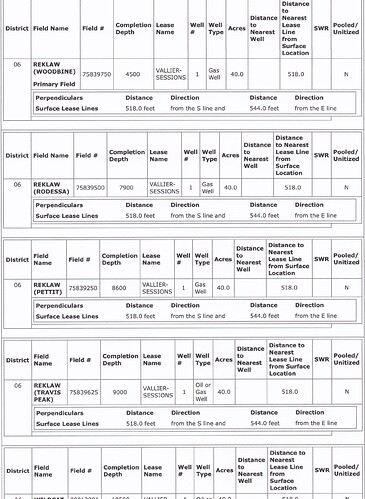 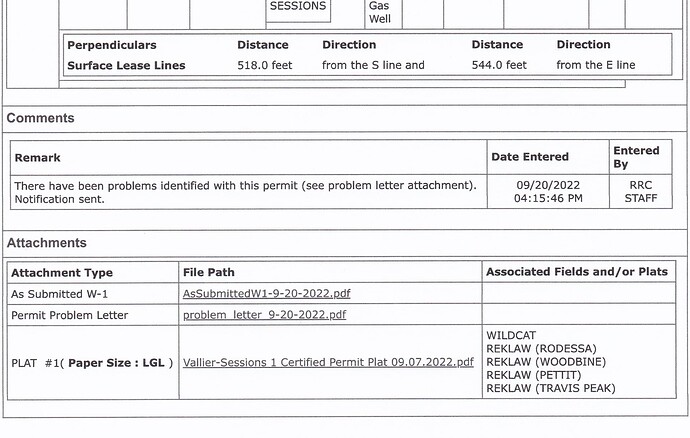 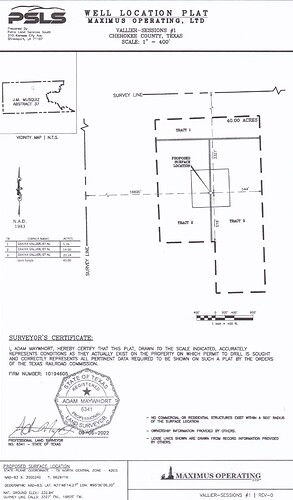 That’s an interesting find, Dusty. It could be a science well, but it’s only permitted to 10,500 feet, and I would think the target formation is deeper than that. That’s the only Cherokee County permit that Maximus has filed according to RRC data. Of course its possible that they could file an amendment later to increase the depth.

I continue to believe that there is a bigger E&P company behind the Key Exploration leasing, and perhaps this Maximus permit has been filed on that company’s behalf. At the beginning of The Goodland Lime boom here in Anderson County, Brammer Engineering drilled a stealth test well for Devon.

Something should break soon…The earliest Key Exploration leases were executed in February 2021, so they are 19 months into the primary term.

Maximus’ permit was approved today. If you look at the location on RRC there’s a vertical well called the Goodson that Cheaspeake completed in 2007. It’s also in the Musquez A-37 survey about 1/2 northeast of the new drill site. Maximus took over as operator in July, 2021.

It was a very weak gas well but is still producing enough to control some acreage but I’m thinking Maximus bought it for the well data. Chesapeake had permitted it in three zones, deepest being a wildcat to 14000’, but it was completed as a Travis Peake at 10856’. If Cheapeake ever filed a completion report I couldn’t find it so there is no way to know if they had drilled deeper. There is another well a little closer to the new site with the symbol for a producing gas well but it shows no API number or name.

LeaseAlert today showed Key recorded more leases in A-37 I assume filing in missing pieces. A lot of their earlier leasing just checkerboarded wide areas rather than putting together solid blocks.