I have 200 arces with .095 interest. I have no idea how to find what it is worth. I have read this form for years and everyone says if you are older and want a lump some, think about it. So I’m thinking… Lol At that percentage, I stand to be making a huge mistake though. They are holding it with a SWD so I don’t get lease offers I guess. It’s Sec. 35, T-18s, R-25. I too have been waiting on Spur to drill the 10 Trudy wells on some other acreage. It is not a fun thing… How do people find the worth to sale? TIA!

As far as I can see there are only 3 non-plugged wells in 18s 25e Sec 35 and they are all deep gas wells. You don’t get paid for one of the Morrow/Atoka gas wells on the map below by Silverback? Gushwa or Rio Penasco… 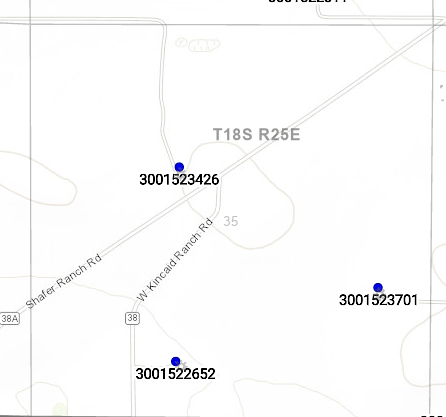 So if you own in Sec 35 and own all rights I am not sure what is up. I see no SWD well, but an SWD well should not hold mineral rights. But if you are not leased then nothing is being held either. Maybe typo on the legals?

Fwiw, I know that Tilden has been offering $4-5k per net royalty acre for undeveloped/unpermitted acreage on the Yeso trend. Just via mailers. Since I got one and an industry friend said they are hitting everyone at a price higher than he can afford. This is by no means an advert for Tilden but that is probably a reasonable barometer on what it is worth from a “the market says what it is worth” standpoint.

If you are not leased I would just assume they will lease you at 20%, similar to what Rick5 said in another thread. Thus 30.4 net royalty acres. At $4.5k = $137k. Rough idea of what someone would pay you for it.

That would be if you sell. IF you hold, and IF they drill 4 wells per 320 acres, and IF those wells make 300,000 barrels of oil each and IF oil is worth $80 a barrel. Then a net royalty acre will produce:

Which is a lot more than $4.5k. But is spread out over 30 years. And might not happen at all. And if it did happen it might not even start for 5 years. Etc. Or maybe oil is $120 and it happens in a year. No control. That’s the difference between the sell market and the “win the lottery” market.

I wish I knew how to get ahold of you to hire to help me… I need help with all this. I do pull a check for those two wells. They are on the 120 acres my dad owned and sold. It was made a sole and separate inheritance. The paying wells are on his 120. The other 200 (sole and separate) only has the plugged JX #3 I believe. It’s very confusing to me. Yes, they sent a bait letter and then offered half. I just don’t understand the percentage thing at all in the division orders. They drilled the wells and we owned .094… of 320 acres. When they redid the division orders after dad got 120 arces. he got .046 and the 200 arces got the same. I figured that was because the wells were on his 120 acres. But because the percentage was split equally, it confuses me. I have 80 acres more than him. The drilled wells are on his 120 acres. If they drill new wells and it’s on the 200 acres that’s mine, will it still be only half or will I get .094 of them? It was explained at the time that if it was soul and separate property, the 200 acres would still be .095… I have so many questions! It’s just all so crazy. 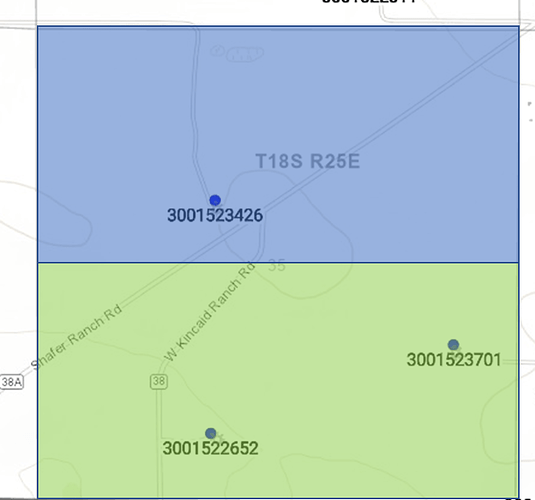 I’m not real interested in getting hired, but I’m fine with helping you if possible. If going back and forth here isn’t helping we can try something else.

Ok. Let me try and answer some of the questions. I took pictures of the legals. The 200 acre description is mine. The 120 was given to my father. He sold it in like 1980 something for 10K. Very stupid move. He was getting checks for over a thousand bucks a month but needed quick money I guess. I found a lease from 1970. Those people sold to yates. So maybe that’s the lease. The wells where drilled in 78 or so.
That’s the only questions I understand. I am posting pics and hope I’m not posting anything I shouldn’t. I would guess it’s all public info anyway. I can’t figure out how to delete them once there posted. Thank you so much for your time and knowledge NMoilboy. I really appreciate it. 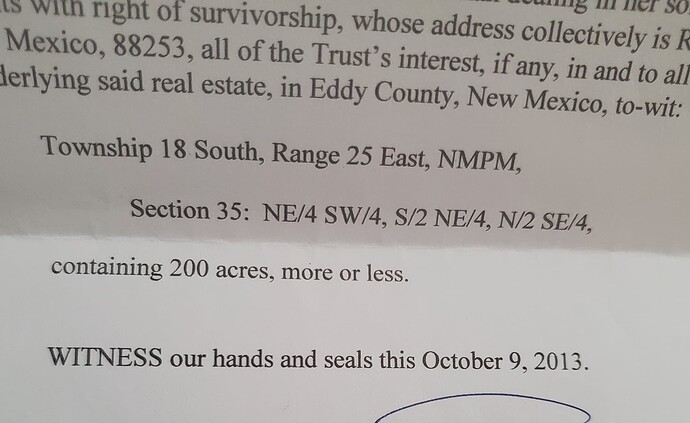 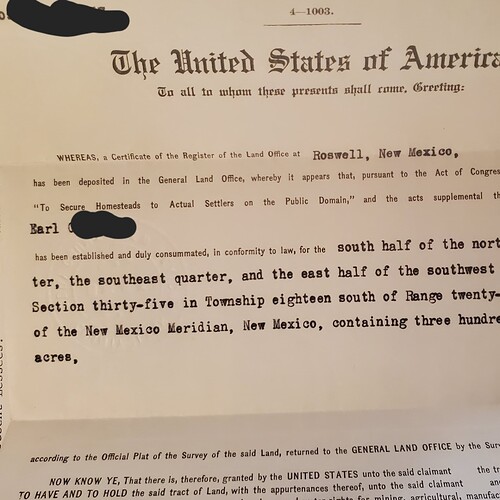 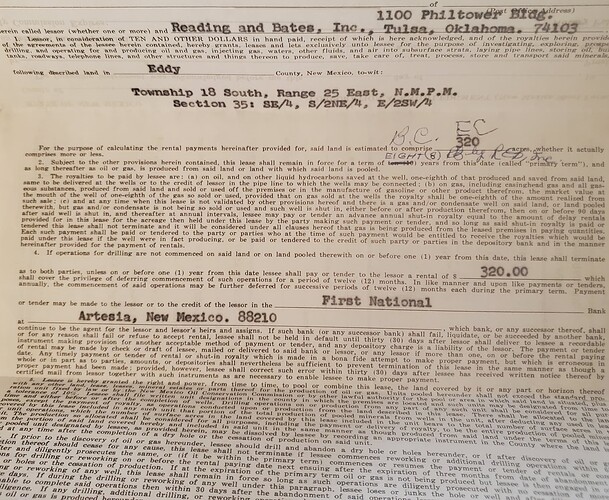 I now own Jane and Richard’s so it is back to .046… I don’t under that really since it has more acres unless the wells are on the 120. What would I have if it was drilled on the 200?

Sorry, busy weekend, wife’s bday, etc. So it looks to me like your people originally owned…

320 acres that were the red and purple below. You personally now own the red. The purple got sold in the $10k story (yikes!) by your dad. The whole thing was leased at 1/8th royalty to Reading and Bates. Which somehow came to be drilled by Yates in two 320 acre units (the N/2 and S/2 of the section, shaded blue and green below). Those wells are deep Morrow gas wells.

The family interest in the Rio Penasco wells (green or S/2 of Sec 35) started as:

A few things where partial pics of docs was confusing. I don’t know what to make of the Robert/Jane/Richard part…other than that is splitting up the .09375 to 3 people. I’d guess you are the “Robert” since you ended up with half of the interest in the S/2. (nevermind I now see your note about owning Jane and Richards). And I don’t get what is going on in the transfer of the deep rights…I mean if that is saying that your dad only transferred the deep royalty rights for $10k, then he still owns the shallow stuff which is what is worth the $ today. Just as a heads up.

Which would mean you aren’t in too bad of shape. That is what I think after spending 10 mins looking at your posts.

I am from Artesia fwiw.

Thank you very much! Yes, that is what they are paying us. So in layman’s terms, do we get 1/8 of each barrel that comes out of the ground? Lake Arthur here…

Yes, you will get 1/8th of each barrel that comes out of the ground from your 200 acres. Same as you are currently getting on the gas wells. The existing wells (and if they drill new wells) will get dedicated to acreage that is part yours, part somebody elses. So have to multiply by that ratio also.

From a “finding a value” perspective, if somebody is paying $4500/NRA in this area for prospective development rights…you have 200NRA (200 acres @ 1/8th royalty). So that would suggest you could sell for $900k if you were interested in selling.

Thank you so much for ALL your help. Not just this post but the others of mine also! I have learned…