I have inherited mineral rights as described above, and have had a number of offers to sell recently. Is there new activity/interest in that area?

CGS’s Santorini unit is in the section directly north of you. CGS also has the Stonecreek unit directly west of the Santorini unit. They have several permits in the area

Thank you. I noticed in another string that Santorini and Stonecreek are both active.

Don’t sell those minerals. lease them to CGS- u r near the “sweet spot” in a hot new play. Santorini has been on line 1 year and produced 240,000 bbls of oil and 220 million cubic feet of gas. The Stonecreek is even better than santorini

go read all the threads on dawson county and u will learn a lot. there is lots of discussion and it is current

Thank you Ed, appreciate your insight.

Like the others said, you are in a good spot. I wouldn’t advise against selling because you can get a good price for it right now. The Santorini has produced 240K bbls but is also on an exponential decline so it is hard to tell how many barrels it will make over the life of the well (I’d guess 500K bbls but too early to tell). If the Santorini continues to decline at this rate then you may see offers decrease. I would expect average offers in your $3500-$5000/acre depending on what your lease royalty % is. If you want some cash in hand then selling isn’t a bad option.

You could sell half your minerals and keep half

The last correspondence with an offer mentioned an option for selling half and retaining half of my 40 acre, 25% royalty.

Could you please share where you saw the production of the Santorini well is in an exponential decline? I would love to see production data for this well. Thank you.

People are mentioning production numbers but failing to miss a key point. We have a friend in oil and he’s helped explain how these wells will produce high volumes at first before the production sharply declines (This being due to pressure in the formation). A well that’s produced 100k barrels in its first year may take another 4 years to produce that same 100k barrels and could take another 10 years to produce the next 100k barrels. I am no saying this will be the case, but we’ve found there is more to geology and production than the average person on this forum is equipped to speak on.

As others have mentioned, a good strategy can be to sell half and keep half. Take some money off the table while keeping skin in the game should they ever drill on your land.

Thnx for this info. Sorry to see the decline in production.

That’s not exponential decline. That flat production from a choked-back well (a strategy of flowing back new wells). Gas is increasing still. (February was the great freeze…ignore that)

It’s helpful to see all perspectives and data regarding Santorini. If crude prices continue to increase, maybe we’ll see some activity in our area. 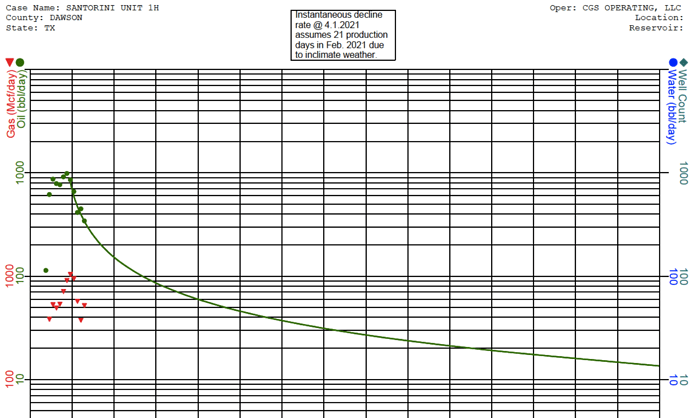 Here is the production plotted for the Santorini. It hasn’t started its curve yet and is dropping off at a considerable rate. This well is on ESP (electric submersible pump) and is not being “choked back”.

Point being, Dawson is far from a proven field for horizontal drilling. I’ve been watching it for a while now out of curiosity and if I owned minerals I would definitely sell half or all at the right price. Certain areas will be better geology than others so you can expect that there will be wells that will not produce as much as the Santorini.

Ah, I didn’t see March and April production on my phone at first but now I see the second page that lists it. ESPs can limit production without using a choke due to being slightly undersized for the fluids, so yes, it likely wasn’t “choked back” with a choke but the result is the same.

It does look like it’s declining now, but it’s supposed to decline eventually. Even 6 months of production can be a bad correlation to ultimate recovery though. These wells are expected to have a steep initial decline, so that by itself doesn’t mean much without the longer term character and economics of the well as a whole. What’s the EUR on that curve there? (Which, I know you know, but for others, that curve there is not exponential decline and is also what most all of these horizontal wells see).

All in all, yes, this is unproved area. Risk is still very high for results to swing in both directions. I would not put my life’s savings in any one part of this county. But from what I’ve seen, results and actions are more positive in nature than other areas of reservoir delineation, but I don’t have any skin in the game or inside information. Just following from a distance as well.

Oxy leased a lot of land in Gaines. Any idea what was up with that?

Pony Oil tried to buy our mineral interests about 3 years ago. (We decided to hang on to it at that time.) I’m wondering if Pony was always going to flip it or whether CGS made them too good an offer to turn down.