Fluctuations can occur for many reasons and are fairly normal. One might be the frac of a well nearby. They close the producing wells to protect them during the procedure. Another might be for replacing a mechanical part. Since the volumes came back up, would not worry about it. The long term production is the larger target.

And good news for you. There are quite a few more Courbet wells that will be drilled as infill wells-a few have already spud.

Thank you, Martha! You are always so very helpful.

Hi Martha…if we are receiving royalties on the Courbet 1-27-22 well will we be getting royalties from the offshoot wells? I am also receiving OCC notices on the other 15 or so wells on nearby sections. I have quite a few of the sections and 27 was the first. Are they taking our existing wells that we may have on any of these sections and incorporating into the multi wells? I see where they list the wells in those sections that they are asking the OCC to allow them to put them into their wells so why dont get any say in the matter? I am thankful for what I have and perhaps this is actually a blessing but sometimes I wonder how they can just do that without asking us or some kind of way to yay or nay it. The amount decreases a lot when added to multi as more acreage divided among a lot more people. Guess I’m a little confused on how they are able to do this. Any clarification would be welcomed. thanks.

Yes, any of the increased density wells that are in the same spacing unit as your acreage will give you royalties.

They usually don’t reuse a borehole for horizontal wells, but it is possible. I am not sure exactly what you mean by “taking our existing wells”. If they are still producing, they will probably leave them alone and drill new wells. What sections are you asking about?

Your lease or pooling gives them permission to drill the wells according to rules of the state. It is a blessing and we share according to how many acres we have in each of the spacing units. Been that way for a hundred years!

Most of the spacings for horizontal wells are at 640 acres. The equation for your royalties is: net acres/actual spacing acres x royalty x % perforations in your section. It is actually a benefit to have the multi section wells because the production is higher. They can perforate more feet as they are able to perforate what is usually an easement around the borders of a section. So several hundred more feet of perforations.

Here is a picture of the MIssissippian Courbet wells. If you own in 27, then you will get royalties on the Courbet 1 (in black) that goes north south on the east side of the sections. Note that is is not quite up to the lease line. It is up next to the easement. The easement also goes east west at the northern border and the southern border, but it is waived for a mutli section well so they can perforate the extra few hundred feet. The same will happen on the other wells, they well be able to perforate the whole length of the horizontal section with no gaps. As the amount that is drilled in each section varies, your decimal will vary by well. 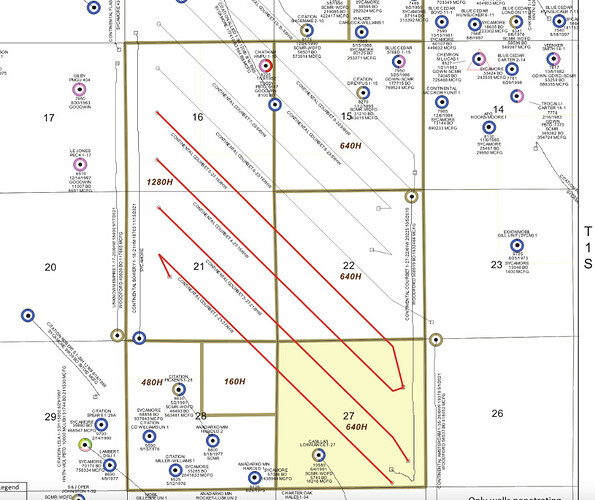 Image of the Sycamore wells.

I think you are going to be very thankful about this time next year! Many of the wells have been spud. 1000 is the permit. 1001 is spud. Look for the ones with your sections in the name. 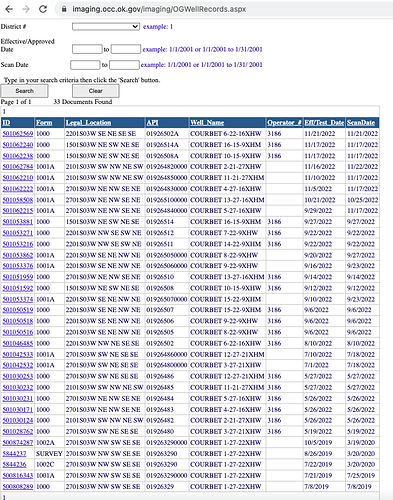