Confused re: receiving check for oil and gas

I was informed I would be receiving a check for a well near other wells I have. (It hasn’t arrived yet) It is from an oil company I have no lease with and have never received royalty checks from previously. I am able to look at the check stub detail and it shows this check will be payment for production from 2/19 thru 3/21. When a return call from a voicemail I left was received, I attempted to determine where this well is. The gentlemen couldn’t tell me much and when I inquired if they had acquired the lease from one of the bankrupt oil companies, he said no. Nor could he locate a lease under my name with his company, Equinor. The entire thing is a complete puzzlement to me. My question is regarding N.D. Code 47-16-39.1. I always thought that it protected royalty owners to get paid 150 days from when oil and gas is marketed. 2/19 to 3/21 is very long past 150 days. Can someone help me understand any of this? I have also noticed on check stubs from other oil companies the royalties I am receiving on the check are from 2019. These are not small checks, not checks under $50. The well I am awaiting the check for is SJOL5-8 F XA#1TFH if that helps. The other wells they are near are my Little Muddy wells.

Please give the section, township and range and we can look it up better.

You can look up your wells on the North Dakota Oil and Gas Division site. https://www.dmr.nd.gov/oilgas/findwellsvw.asp Your section is part of a larger unit that goes into section 8 as well. Oil companies frequently change names. Equinor is the new name for StatOil. The spacing is for 4 sections, so do you have acreage in 6 or 7? The Little Muddy wells belong to them. They are operated by Nine Point. They are spudded in section 6 & 8. Your original lease may have been with one company, but when the wells were unitized, you may have been included in a larger unit. There are a lot of wells in 5 & 8, so see what the check stub says with regards to the other wells. Sometimes, there are catch up royalties when they do additional title work.

M. Barnes. Thank you for taking the time to help me sort this out.

Once you get this new check, you may see that you have royalties from the other wells in section 5. It may take some time to get it straightened out. Ask the operators tons of questions. Ask them why they did not pay you right in 2019. Also, you may have to send a certified letter, return receipt requesting the interest payments on the wells.

I have the exact same issue only I have not received the actual check yet either. Is it okay to keep in touch with each other so we can maneuver through this confusion together? Our wells are in the Little Muddy as well. When were you informed that you would be receiving a check from Equinor? I received notice on May 25, 2021.

Sounds like there are several families that are getting notices. Keep copies of everything that you receive. Go on the website that I posted and you can search out the wells for each section. Usually the map is working, but it was not when I searched yesterday. The general level search is free, but you can join for a year for $50 and download all sorts of other useful information such as production data, etc.

I have several tracts in ND that are like this. They tend to space much larger areas than in some other states. My little acreage in one section is getting revenues from four sections. Most everything really slowed down last year so now that prices are up and the wells were completed, I am seeing Division Orders for new wells and revisions back to 2019. Do ask for interest payments if they are late. You need to send a certified letter listing your name, address, description of acreage and request interest back to date of first production.

Here is the map of the area. Got it to work today. The Muddy Wells have a four section spacing which includes Sections 6 &1 plus 7 & 12. I have a feeling the Equinor well is the very westernmost (left) well along the border between 5&6 7&8 and they may be giving you credit for perforations that slipped over into sections 6 & 7. 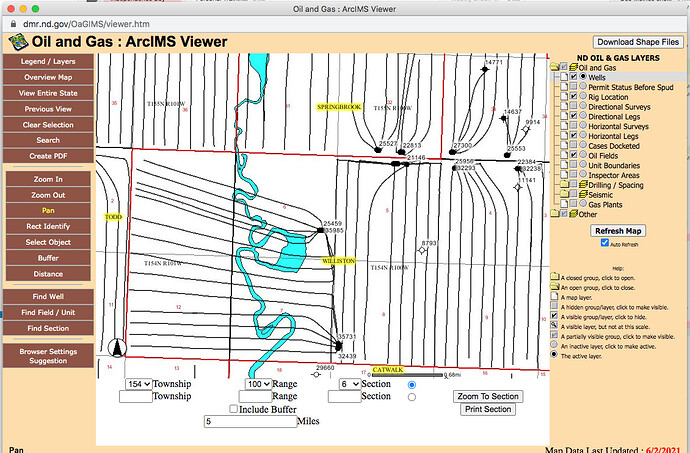 Here is the survey of the well SJOL 5-8XE #1TFH. Dark blue north south well right on the border of the sections on the far left. Note the Muddy surface location in section 8 in the far SW corner. Equinor’s old name was Stat oil. 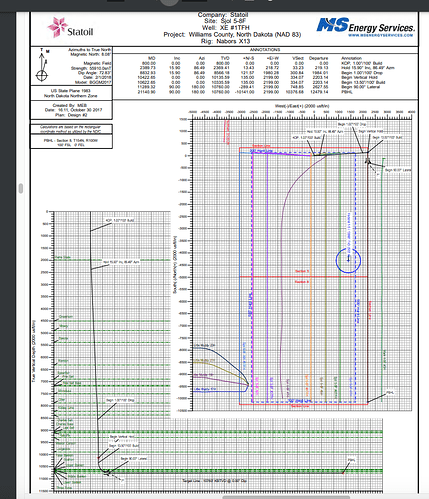 I was informed on May 24. I subsequently called Equinor’s customer relations. They do return the voice mails in a timely manner. The problem is the answers to my questions, most questions, is ‘I don’t know’. They did send me a W9 and a request for direct deposit form. You can fill out the W9 online but you can’t sign it. I faxed it. I filled out the request for ACH but it wouldn’t accept the last four of my social which was requested on the form. I called customer service again. Good thing I did. I was told that until they have the W9, they can’t process the request for ACH. Then I was told they got my fax but half of the page was missing. I refaxed it twice… just in case. Each time I turned it head over heels. Lol. So they could get a whole page. Just in case. Then I was told it would take several weeks to process the W9 and on top of that, the subsequent additional several weeks to process the request for ACH. All that, by itself, is frustrating, let alone, they held funds and paid in the third year of production!! The N.D. Century code says they have 150 day from the production to market. That’s at least how I read and understood it. Ms. Barnes indicates we should be given interest on that. Which brings up a whole other concern. Nine Point filed for Chapter 11. They subsequently sent a check, I believe in March, with a 14 page check stub detail. That, too, had production being paid back to 2019. Do we send certified letters requesting interest? Or are we to believe they extracted that oil and it just sat there since 2019 and didn’t get sold until now? I didn’t see in the Century code a remedy offered if there was noncompliance. I am so grateful to have these mineral rights but, my gosh, sometimes they exhaust me trying to keep abreast of what the heck is happening. Sorry this was so lengthy. I wanted you to be prepared for the W9 and Direct Deposit run around.

Go ahead and send a certified mail request to Nine Point asking for any back interest and also a copy to the attorneys handling the bankruptcy. The bankruptcy could complicate things, but you will have documentation. If it is Chapter 11, they should come out reorganized and in hopefully better shape. Now go back through your paperwork from the bankruptcy and see what they said regarding the status of mineral owners. It is often in one of the massive mailings that they send. Sometimes it is automatic payment and sometimes you have to claim royalties (and interest) by a certain date.

Send another certified mail to Equinor and request payment if any back interest. Keep copies of everything!

Thank you Poppi. I will keep my eyes peeled for the W9 and Direct Deposit form to eventually make it to my mailbox! I appreciate the heads up.

lmlong- I only got the W9 and request for direct deposit because I asked for them. I suggest you call Equinor and request them. I’m wondering how long it’s going to take to actually receive this check I was informed about almost two weeks ago.

Thank you Poppi. I will definitely contact Equinor about the Division Order, W-9 and request for Direct Deposit. You have been very helpful!! I appreciate it!

Hi Poppi - Here is an update on the status of the check from Equinor. I received a physical check in the mail yesterday! However there was no W-9 or Division Order included. I also received notice that Equinor has agreed to divest its interests in the Bakken field in North Dakota and Montana to Grayson Mill Energy LLC and their affiliates (collectively, “GME”). Closing of the sale took place on April 26, 2021. In the coming weeks we will receive correspondence and requests for information directly from GME to facilitate and effectuate the contemplated transition. In the meantime we are to continue to contact Equinor’s Owner Relations Team for any questions or concerns.

Apparently GME will not be using EnergyLink for the revenue statements and there is information on the check directing us to set up an account on their site.

Be encouraged! Your check should arrive in the mail!!

Yes I did get mine. You definitely have to request the W9 and request for direct deposit. They received my W9 last week and still haven’t processed it and because of that, the direct deposit form stops me from completing it until it can recognize my social sec number. It seems every oil company I deal with has schemes to prolong the time from when they write a check to when it can actually get into my account, for my use. Until then, they’ve got that in their account using it or earning interest. Fourteen days from date on check to getting it to my bank is outrageous! Glad to know you received what was due you.