Similarly, are minerals confined to a single square-mile PLSS section less valuable (NPV) than acreage that operator can pool into 2-mile laterals?

The operators adage or myth or whatever (depends on your viewpoint) is that recovery (of oil/gas) is linear with lateral footage. A two-mile lateral recovers twice the oil of a one-mile lateral. Cost, however, is not linear with lateral footage. A longer well is cheaper per foot because both wells still have to pay the same amount to drill the vertical section and its a bit more horsepower to frac a longer well and facility/connect costs are mostly fixed. So the longer the lateral you can drill, the better the economics are for the operator. I think that is largely unchallenged. At some point its hard to drill and frac a well, so 3 miles is pushing it currently. Longer laterals also means less pads, surface disturbance, etc.

You want operators to want to drill wells on your land, so if 3 mile laterals are better economics for them, or they have convinced themselves that is the case, then it makes your land worth more as you are more likely to get wells.

I think shorter laterals producer more per foot, but whatever. I’d like my minerals to get stripped mined in the least efficient way possible until there is no recoverable oil left. But I’m greedy. Mostly you just want stuff to get drilled. 1 mile, 2 mile, 3 mile, whatever.

Thanks. Agree longer laterals should deliver higher operator Rate of Return, assuming per foot mineral extraction being equal, because upfront costs are reduced. Your comment “think shorter laterals produce more per foot” is interesting. Maybe the jury is still out on the revenue side of the equation of 3-mile laterals, which are not yet commonplace? Operator’s CEO said in an earnings call that simply extending length does not guarantee per-foot incremental profit.

My concern is drilling in our 2-mile pooled unit may be deferred because our operator recently began drilling 3-milers nearby, our 2-mile x 1/2 mile pooled unit is blocked in leasehold cannot accommodate 3-milers. Nothing I can do about it, except wonder what year operator will return to our held-by-production unit with the planned infill wells.

Re: I think shorter laterals produce more per foot

If you frac a 250’ stage in, say, 6 clusters with 50bbl/ft of water and 2000#/ft of sand in a 3 mile well and you frac a 250’ stage with same design in a 2 mile well, your model is going to tell you that that 250’ of lateral length produces the exact same amount of oil. For any stage at any place along the length of the wellbore. That’s what a model does.

Wellbore hydraulics are different the further you get away from the heel (where the lateral starts) of the well. Both for pumping in fluids (fracking) and flowing back fluids. It’s harder to produce from the toe than from the heel. That stage 3 miles away from the heel in the same 5.5" liner has to flow 50% further, up a rollercoaster wellbore, that may get sand in it, etc. Into the same size facilities as a 2 mile wellbore etc. At some point, you are trying to stuff 10# of sh_t into a 5# bag as you make laterals longer. There are going to be some inefficiencies. That is what I think. I’m sure if I had a giant Spotfire/Tableau DB of all the wells in the US with all of the completion inputs I could go and get a dataset where the only meaningful variable was lateral length and make some great plot of prod/ft vs lateral length. In my past life we would do that and shorter wells were better and eventually someone would just say “put a flatter long term decline on the longer wells so that they get the same ultimate recovery per foot”. Which, frankly, makes some sense. But shorter wells are better up front.

Here is a small dataset (100s of wells) from EOG in Lea County NM from my current life. 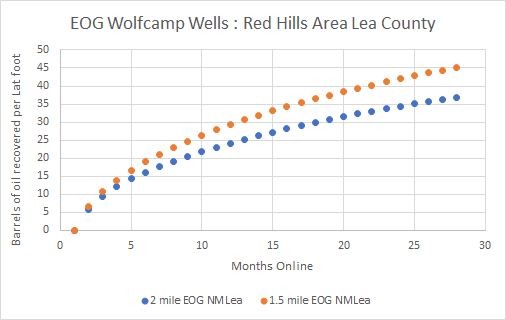 I’m not arguing that longer wells aren’t better econs. Or that they don’t make more oil. But I think for a mineral owner you’d rather have short wells get drilled. But, as you say, if they can only drill shorter wells on your acreage and instead choose to go drill longer wells somewhere else because the ROR is better for them, well than that is definitely not a good thing for you.

But in general, shorter wells come on at higher per/ft rates. In my opinion. People should drill 2 miles without hesitation IMO. 1 mile wells it gets a bit worse on operator econs, so I think I’d be a little worried about getting developed if I had a stranded single section. Shrug.

This is way too much information for this topic/forum I just was bored.

grateful for your experience & perspective. I usually listen some of the E&P earnings calls, I’ll bet the analysts ask a few questions about 3-milers since they’re becoming more common, I’ll append any interesting commentary to this thread in case others are interested. E&P is so complicated … “the lyffe so short, the crafte so longe to learn” (Bede).

The odds that anybody answering lateral length questions on an earning call knows anything about the subject is not high.

I listen to conference calls and realize they don’t know much at all about the few things that I know a whole lot about, but for some reason I assume they know what they are taking about w.r.t. to the many things that I know nothing about. Gell-Mann Amnesia affect at work.

In the end, they are good at the narrative which is what is important. I guess. Well that and politics and 90 hr weeks, and all the other things that sound miserable.

But it’s sure annoying to have somebody tell you every few months to redesign your whole plan for 70,000 acres of Poker Lake for 3 or 4 mile lateral development just cause some salary grade 35 fella is confusing SE New Mexico with Sakhalin Island.

Somewhere along this life trajectory I became a very grumpy old man.

So based on what you all are saying, I would guess this one of my holdings is a stranded area now. To bad, one of the few I have that is an ORRI. 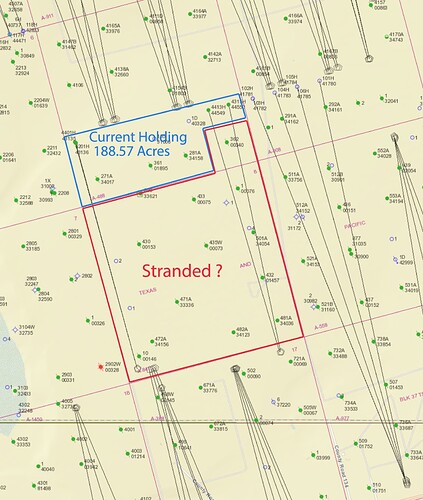 I don’t think its stranded, its just less likely to get drilled than 2 mile laterals. 7000’ laterals are better than 5000’ ones.

Am I missing something with this 4-mile elephant well, API 227 40850 lease 55700? Seems mediocre. TVD 7,089 deep, MD 28,332’. Produced only 77,485 bbl and 53,593 MCF in first three months, for a four mile lateral. In comparison, our held-by-production 2-mile well (Reeves County) produced twice as much oil and exponentially more gas, drilled 2019 and fracking techniques are improved since then. SM Energy’s slide show says it produced 1,540 Boe/d peak IP rate. I am underwhelmed, am I missing something?

Rystad newsletter April-2021 wrote that shale laterals longer than 11,000’ increased from 8% in 2018-19 to 19% of new wells in 1Q21. This week, most E&P earnings presentations mention 3-mile laterals, SM Energy boasted about its 4-mile lateral (above). Only one analyst asked about 3-mile laterals, in Pioneers earnings call, most analysts were obsessed with variable dividends & buyback programs … Pioneer said 11/4/21 they drilled about a dozen 15,000’ laterals this year, will double the number of ultra-long laterals in 2022, experienced no drilling/completion issues, will continue adding laterals longer than 12,500’ as “huge value adder to our program”. I think PXD puts 500+ wells on production, so the percentage of ultra-laterals is still small. Devon said federal acreage in New Mexico is conducive to 3-mile units. EOG does not report until tomorrow, EOG has 3-miler track record.

In my opinion, E&P companies must have contiguous leased sections in order to form three mile pooled units. Perhaps E&P companies will conduct some acreage swaps to size up leaseholds.

Well as long as we are going to apples to apples Reeves and Howard, my one mile lateral in Ghawar made more than that in one day.

It looks like 4mi SM well produced 2177 bo in June, 34210 bo in July, and 41098 bo in August. If it keeps inclining like that it will make the volume of the earth in short order. All kidding aside, a 41kbo peak month well for Howard is quite good. To your point, it’s not twice as good as the average two mile though in the same area. More of a technical achievement than earth shattering economic improvement. I think its kinda cool that they tried it.

Early time production data is not linear with lateral length. It just isn’t, no matter what your EVP might tell you he heard somebody else in the C-suite say in between discussing how to layoff some of the poors. It’s a fairly rationale belief IMO to hope that longer laterals will have shallower declines and make an ultimate recovery that is commensurate with their length. So maybe the average Howard 2 mile lateral makes 500kbo of oil over its life and this SM well squeaks out a million. Or something.

I have tiny interests in some Devon NM 3 mile laterals (Maldives) and they are nuts. Drilling longer probably helps more of the potash area in NM get developed, which is interesting in my neck of the woods.

NMoilboy, your Devon Maldives 3-mile wells are nuts, meaning good, I hope? Devon said yesterday their NM developments are quite successful, Boundary Raider in Eddy one of them 7,300 Boe/d, and Thistle Cobra in Lea is “prolific 3-mile success” 6,300 Boe/d (slide 13, earnings deck), measured at IP30.

The SM Energy 4-mile well in Howard display GIS Symbol Description as “shut in oil” on RRC map, maybe temporarily shut-in why nearby wells are fracked, to prevent frac hits? You say 41,098 bbls is good for Howard in peak (month 3, 4-mile lateral), I suppose our Reeves 2-mile well which peaked at 60,153 bbl month-2 must be excellent, especially since fracking improved since it was drilled.

Agree, royalty owners just hope wells get drilled, regardless of length. For sure, this 3-mile trend is spreading.

Those Maldives wells didn’t necessarily make any higher IPs than the other shorter Devon wells, but the two that have been online for 18 months have made 808kbo and 670kbo respectively. That’s more than many Delaware wells will make in 40 years. Seem to have pretty flat declines (steep but not omg holy cow steep).

So, in short, nuts in a good way. The 2nd Bone Spring on the Lea/Eddy county line is very very good in general.

Point prior is comparing wells in Howard with your wells in Reeves doesn’t say anything whatsoever about the smartness or silliness associated with drilling longer wells. It’s 150 miles and 3 basins between Big Spring and Toyah. Is the longer well better econs than the wells around it? Too early to tell I’d guess.

Reeves is a big county, and I don’t know where your Reeves well is located but if it made 60kbo in a month, that’s a good bit better than average I’m quite sure. Here’s an average well in northern Reeves, peak month about 37kbo. 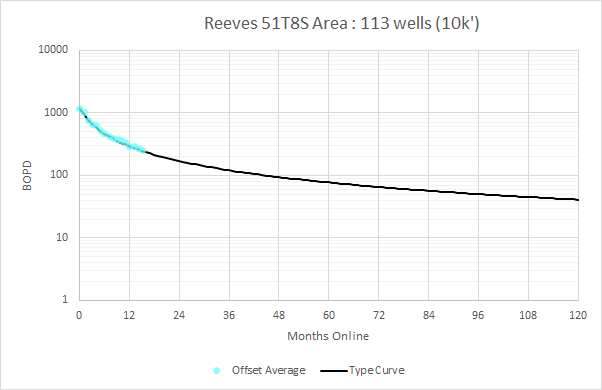 Heres one in Howard County (around T32 1N), peak month about 29kbo